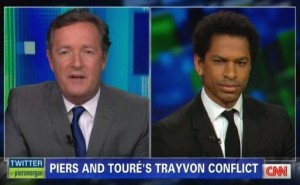 Earlier today, MSNBC contributor Touré and  CNN’s Piers Morgan duked it out on Twitter over the Piers Morgan Tonight host’s interview with Robert Zimmerman, Jr., brother of Trayvon Martin killer George Zimmerman (who claims self-defense in the shooting). The result of all that smack-talk was an impromptu booking that culminated in a crackling Touré appearance on Friday night’s PMT.

The weird thing here is that Morgan’s show tapes in the afternoon, and airs at 9pm, so after the taping, the two continued to talk trash on Twitter, each declaring victory:

Touré: Resorts to name calling cuz I killed him on his show. RT@lolaogunnaike: Why is @piersmorgan calling @toure a fatuous loudmouth? It’s beef?

Piers Morgan:Poor old @Toure just got exposed for what he is – an unprofessional, fatuous, loudmouth. Tune in at 9pmET to see for yourself #CNN

Touré: Will be interesting to see if tough guy @piersmorgan edits our interview to save his ass or shows it like it really happened.

Touré began by reiterating his criticism of Morgan’s interview, then crowing that “in the hallways (at NBC) we were laughing at you. We wouldn’t take him. Standards and Practices at NBC wouldn’t let (Robert Zimmerman) get through door.”

Morgan pointed out that “MSNBC, as has NBC, has all been running clips of my interview, without challenging it. Nor are they quibbling with the news value of the brother of George Zimmerman going on the record and giving his version of events.”

He also argued that he “challenged him repeatedly about many of the things that he was saying.”

That’s when Touré played the England card. “What you understand as challenging, perhaps maybe that goes in England. That’s not what we do in terms of challenging in America. I saw a person who was saying things that didn’t ring true to me.”

It was a theme that the two would revisit in the next segment, in the most emotional part of the interview, when Morgan challenged Touré about a joke that he had tweeted. All of the meta-wrangling about who’s a more professional journalist melted away, and the raw power of this story became evident.

“You tweeted this on the 19th of March,” Piers said. “‘New slang. You’re Zimmermaning me equals you’re killing me.’ That’s a pretty serious responsible piece of journalism, isn’t it, Touré?”

“In the first days, in the first weeks of the situation,” Touré responded, “what I was trying to do is to pile on and to say ‘Hey, look, this guy is not doing the right thing. This guy has harmed somebody in our community.’ Some people misconstrued that. But this is an incredibly serious situation.”

“So serious that you felt the need to throw out jokes,” Morgan shot back.

Touré compared his joke to “the blues,” adding “You might call it black humor. Not African-American humor, but black humor. Dark humor. These are things that are common in America, that laugh to keep from crying. Once again another black person who is unarmed and innocent and not doing anything wrong has been killed. And this is incredibly painful and goes back before before you were born, and before your father was born, and before my grandfather was born. So these are things that hurt as an American very deeply. And you are too new to this situation to fully understand what’s really going on here, and what’s really at stake for America.”

Morgan paused. “What a load of fatuous nonsense. You think you have the only right to speak about what’s serious in America. You think I don’t have the right, as somebody from Britain who spent the last six or seven years here, to address the story?”

He then asked Touré if he believes George Zimmerman murdered Trayvon Martin, to which he replied “Yes.”

Morgan pounced. “So you’ve already tried him? You’ve convicted him?”

“You asked me what I think,” Touré responded.

“You called me an irresponsible journalist. That is professional?”

Point: Morgan, but then Touré launched into a powerful summation of the Trayvon Martin case that could easily serve as any eventual prosecutor’s summation.

Morgan finished with a further defense of his own journalism. “What I haven’t done is convict George Zimmerman because I haven’t seen the facts yet. You berate me for lack of journalism. You said you believe he murdered him. You have a biased one-sided opinion based on the limited amount of facts that we have at our disposal. That’s your prerogative. You also think it’s okay to do stupid dumb jokes, mocking, what do you call it, Zimmermaning me? I like to think that I’m a professional journalist. I think you are something else.”

When you strip away all of the pique and ego, what you have is a few minutes of very powerful TV, and a great illustration of the conflict between utter neutrality and the power of a point of view.