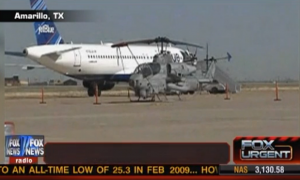 A JetBlue flight made an emergency landing in Texas today after what the airline said was “a medical situation involving the captain.” Some reports say the pilot yelled for passengers to “say your prayers.” Fox News’ Shepard Smith spoke to Laurie Dhue, a former Fox News anchor herself, who coincidentally happened to be on the flight.

The flight, which left New York, was scheduled to land in Las Vegas. According to reports, the captain had to be restrained, but all passengers are unharmed. Dhue called in from Texas and narrated what she saw:

“He said, ‘Let me in, let me in, […] We gotta get this plane down, we gotta get this plane down.’ And he’s trying to punch in the security code to get in, and the flight attendants which were at the front of the plane were trying to stop him from doing this. Fortunately, he was not able to get into the cockpit because he was having a breakdown of some kind. Immediately after that happened, several huge men, who happened to be sitting in the front of the plane […] rushed down the aisle, rushed the captain of the plane, wrestled him to the ground in a matter of seconds, and got him subdued pretty darn quick.”

Coincidentally, a former NYPD officer “happened to be on board.” He told Dhue that he’d heard the pilot is war veteran and was suffering from post-traumatic stress disorder — which local authorities also confirmed to Dhue. Smith asked about reports that the pilot “said something about a bomb.” Dhue said she didn’t hear that, though a passenger sitting near her did hear him say the word “bomb.” Dhue added that the pilot did say the words “Afghanistan” and “Israel.”

“What a weird flight,” Smith concluded.

He turned to his panel and said, “I don’t know what I’d do if some pilot came running down the aisle all weird now.” Upon mention of how this is related to Staff Sgt. Robert Bales (accused of shooting Afghan civilians), Smith simply replied, “I don’t know. I’m just glad not to have been on the plane.”