Pilot to Sean Hannity: TSA “Wanted To See My Penis” But It Was Only “Optional” 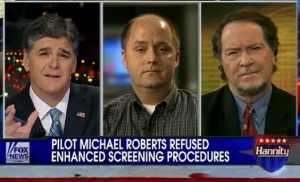 Junkgate is in full force, and things are only getting weirder. As the TSA’s procedures on how to handle airline passengers are coming under scrutiny, it seems like everybody’s speaking out about their touched junks. But perhaps the most unusual anecdote belongs to pilot Michael Roberts, who told Sean Hannity last night that he’s suing both the TSA and the Department of Homeland Security. As he explained, “They wanted to see my penis.”

“And when I told them that was not okay,” he went on, “They said ‘All right, that’s optional. But we’re going to have to put our hands on it instead.'”

A creepy story, certainly—almost too creepy for Hannity. “They wanted to see it?” the incredulous Fox News host asked. “That’s what those machines do,” Roberts explained. “It’s a virtual strip search. They can see whether a man is circumcised or a woman is menstruating.” After a pause, he added, “They can see everything.”

If I don’t show it to them, then they insist on touching it. And if I don’t let them do either one of those things, my only option is to go home. So that’s where I am, at home.

Watch the perturbed pilot tell his tale in the Fox News Channel clip below: