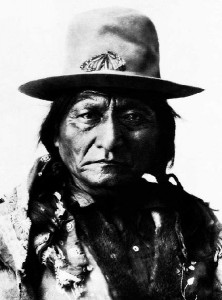 President Barack Obama‘s latest book, Of Thee I Sing: A Letter to My Daughters, is a 40-page tribute to great Americans that’s aimed at kids between four and eight years old. In it, Obama lauds extraordinary people like George Washington, Jane Addams, Billie Holiday, and Neil Armstrong. But one of the President’s choices is apparently a controversial one, according to Fox News’ opinion site Fox Nation: Sitting Bull, who Obama calls “a Sioux medicine man who healed broken hearts and broken promises” and Fox Nation calls an “Indian chief who defeated [a] U.S. general”.

They’re referring, of course, to the Battle of Little Bighorn, where members of the Lakota and Cheyenne tribes defeated 263 soldiers, including Lt. Col. George A. Custer. Originally, Fox’s headline was even stronger: “Obama Praises Indian Chief Who Killed U.S. General.” (The word “killed” also still appears in the article’s URL.)

But as Todd Wilkinson points out at the Huffington Post, that accusation was wrong “on at least three counts: Custer wasn’t a ‘general’; there is no evidence to indicate Sitting Bull personally ended Custer’s life; and it isn’t as though Custer was involved in a patriotic goodwill mission worthy of veneration.” One might also think that Fox would want to be sensitive about denigrating Sitting Bull right now, since November happens to be Native American Heritage Month.

After a good deal of media criticism, Fox Nation altered the hed and added an editor’s note at the bottom of the post: “Headline has been corrected for historical accuracy.”

No matter how unbiased Fox’s news division may be—and there is evidence that proves much of the channel really is fair and balanced—incidents like this and Roger Ailes‘s recent interview with Howard Kurtz aren’t doing the network any favors. If Fox wants viewers to take it seriously as a news organization—rather than as a channel pushing a partisan agenda—it’s going to have to stop giving its opponents this sort of ammunition.