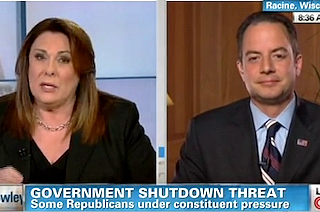 Reince Priebus appeared on CNN’s State of the Union and told host Candy Crowley that she was “adopting” the Democratic Party’s spin on the GOP’s threat to shut down the government over Obamacare, and that it is the Democrats, not Republicans, who are in disarray over funding President Barack Obama’s signature legislative achievement.

“All Republicans are unified on one thing: defunding, delaying, getting rid of, eliminating Obamacare,” Priebus said. “We have total unanimity on that issue.”

“Even if you take the position of a Ted Cruz or Mike Lee, what they’re saying is we actually are funding 100% of the government except for that small percentage of discretionary funding to Obamacare,” Pirebus continued. “So Mr. President, if you want to shut the government down because you want to continue to fund this monstrosity that you’ve admitted is half-broken, then go ahead. The fact that it’s on the Republican Party I think is spin from the Democratic Party that you ought to not be adopting. I don’t know why you’re adopting that spin.”

“Because here have been plenty of Republican congressmen and senators saying that ‘This will ruin the Republican Party if we’re seen as forcing the shutdown of the government,'” Crowley responded. “It hasn’t really worked for Republicans in the past.”

“I mean, it’s not like it happens every year,” Priebus replied. “What I am advocating for is to set the record straight: the Republican Party is the party that is totally unified in defunding and delaying and getting rid of Obamacare. It’s the Democrats who are fighting each other over the overall picture of whether we ought to keep Obamacare in place.”