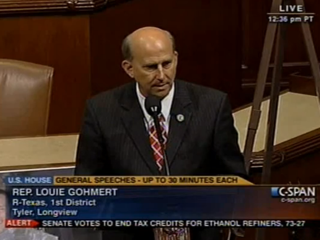 Rep. Louie Gohmert has made a splash or two during his tenure in Congress, between his “terror babies” claims to questionable Nazi references on the House floor to, well, this. Last week he was at it again, this time noting that there were 57 members in the Organization of the Islamic Conference, suspiciously the same number of states President Obama had claimed existed, and that American public officials took their oaths “in this body… not to the Muslim Brotherhood.”

The conflated message fails to make any direct links or accusations, but the implication is rather clear. “Perhaps there was some confusion whether he’d been to all 57 Islamic states as opposed to all 50 U.S. states,” Rep. Gohmert noted, adding immediately that the President’s “obligation” was to America, “not the 57 Muslim, Islamic states.” Additionally, he reminds his colleagues that their obligations are “not to the Muslim Brotherhood, who may very well take over Egypt”:

And I know the President made the mistake one day of saying he had visited all 57 states, and I’m well aware that there are not 57 states in this country, although there are 57 members of OIC, the Islamic states in the world. Perhaps there was some confusion whether he’d been to all 57 Islamic states as opposed to all 50 U.S. states. But nonetheless, we have an obligation to the 50 American states, not the 57 Muslim, Islamic states. Our oath we took is in this body, in this House. And it’s to the people of America. And it’s not to the Muslim Brotherhood, who may very well take over Egypt and once they do, they are bent upon setting up a caliphate around the world, including the United States. And this administration will have been complicit in helping people who want to destroy our country out of the ignorance to think, if you help your enemies, they’re going to like you better.

Where the “57 states” gaffe comes into play in this monologue on foreign involvement in the Middle East is somewhat unclear, other than to suggest that the President may have mistakenly believed he swore an oath to Islamic and not American states. Given the history of the President being oddly linked to Islam, at the very least this floor speech certainly sounds somewhat inappropriate.

The speech via C-SPAN below: