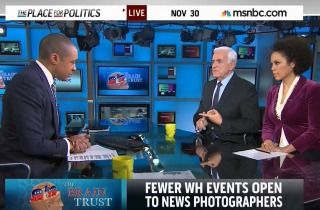 During a segment examining the complaints lodged by a group of photojournalists relating to how the White House manipulates public accounting of events by blocking independent photography, an MSNBC panel tore into President Barack Obama’s handling of relations with the press. One guest shocked the anchor when he asserted that Obama is the “most hostile” White House in American history when it comes to press freedoms.

The segment began with Washington Post columnist Dana Milbank observing that a number of photojournalists have protested this White House’s decision to block photographers from independent media outlets from getting the best shots in favor of White House-approved photographers. He noted that this practice can be construed as an effort to attempt to manipulate public opinion.

“Let’s use the ‘P’ word here: it’s propaganda,” said syndicated columnist and former White House reporter Bob Franken. “Every administration tries to manipulate the press, but this is the most hostile to the media that has been in United States history.”

“The reason I say most hostile is because of the Justice Department moves that they’ve made against the press,” Franken continued. “Obviously, they have a contempt for the journalistic process.”

The Blaze anchor Amy Holmes added that there is some irony in this condition because White House Press Sec. Jay Carney was a former TIME Magazine reporter. “We’re talking about censorship,” she added. “If a photo says a thousand words, this White House only wants happy talk.”

Milbank says that he could accept that Obama may be more hostile to the press than George W. Bush, but that it would be a close contest between the two to determine which White House was the most hostile to press freedoms in American history.

“There has been such a love-fest between this White House press corps and the Obama administration that I think they’ve been putting up with a lot more manipulation,” Holmes submitted. She said that the dynamic between the media and the White House has changed as the administration begins to falter.

“Jay’s sort of like the reformed smoker, you know? He now has disdain for those people in the profession he left behind,” Milbank said. “I think this president also, sometimes justifiably, looks down at people in this line of work.”

“It’s created an underlying hostility that really bubbles up when the administration is having problems like it is today,” he concluded.