Reza Aslan On MSNBC: ‘Anybody Who Watches Fox Knows There Is An Inherent Anti-Muslim Bias’ 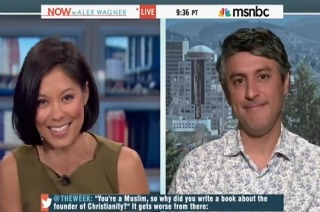 Religious scholar Reza Aslan’s much-discussed interview with Fox News Channel host Lauren Green is still being discussed. In the interview, Green expressed incredulity that a Muslim could write a book about the founder of Christianity, Jesus Christ, in spite of his years of scholarship and accomplishments. On Monday, Aslan appeared on MSNBC where he absolved Green of fault for the offensive insinuation in that interview that a Muslim could not write a scholarly work about Christ. He blamed the producers of the program and charged that any Fox News viewer knows that the network as a whole has an “anti-Muslim bias.”

“Anybody who watches Fox News knows that there is an inherent anti-Muslim bias in their reporting and has been for quite some time,” Aslan charged. “I don’t actually blame them for it. They’re a commercial enterprise. They know how to sell a product and, frankly, fear sells a product.”

Aslan said he felt “really bad” for Green, saying that it was his belief that she asked the questions she did because her program’s producers were telling her to do so.

“What I liked about what’s happened is this is not even about me anymore,” Aslan concluded. “That it’s become this larger discussion in this country about media, journalism, politics, faith. As a writer, I mean, that’s just great.”