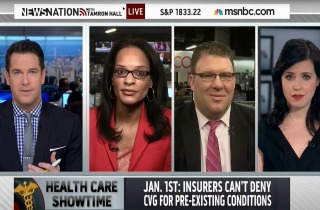 White House health care adviser Phil Schiliro appeared on MSNBC early this week where he dismissed a Congressional Budget Office estimate of 7 million enrollees as the number at which point the Affordable Care Act will be financially sound. He said that the White House never adopted that figure, but merely repeated it because it was a metric which everyone could easily understand.

On Thursday, an MSNBC panel took on the idea that there are no metrics by which the ACA can measure success. Washington Post reporter Nia-Malika Henderson said that it was “ridiculous” to claim that there were no figures by which the public can assess whether the ACA is financially sound.

“And again, the CBO is like the North Star when it comes to figures,” MSNBC anchor Thomas Roberts observed, “because people can definitively follow what the CBO says and not feel that it’s down party lines.”