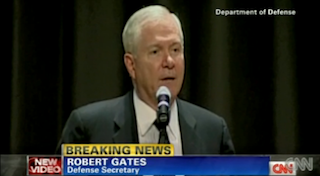 Defense Secretary Robert Gates made a fairly startling admission while speaking at Marine Corp base Camp Lejeune in North Carolina yesterday. When asked about the how government was protecting the men who carried out the mission to kill Osama bin Laden, Gates admitted that there were deep concerns. Apparently, during that fateful Sunday night, everyone in the Situation Room agreed that no information about the mission should go public. Obviously, that plan went up in the air pretty quickly. Those leaks now have members of SEAL Team 6 concerned for their safety and, primarily, the safety of their family.

“‘We are very concerned about the security of our families – of your families and our troops, and also these elite units that are engaged in things like that. And without getting into any details … I would tell you that when I met with the team last Thursday, they expressed a concern about that, and particularly with respect to their families,’ Gates told the audience.

‘Frankly, a week ago Sunday, in the Situation Room, we all agreed that we would not release any operational details from the effort to take out bin Laden. That all fell apart on Monday, the next day.'”

Last night on In the Arena, Eliot Spitzer discussed the comments with Barbara Starr who theorized that Gates’ surprising candor may come from the fact that he is soon to leave office. Deputy Assistant Secretary of Defense Geoff Morrell has confirmed the fears Gates discussed but cautioned that the comments should not be seen “as a criticism of any particular person or office.”