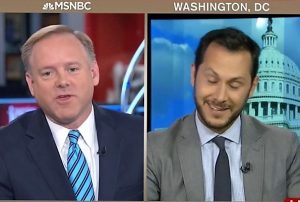 As the days fly by until Election Day 2016, it is becoming increasingly clear that the news media is hopelessly ill-equipped to deal with the volume of lies coming from Republican presidential nominee Donald Trump and his supporters, even when they know they’re being lied to. The latest example of this phenomenon occurred Friday morning on MSNBC, as Sam Stein attempted to call out Brian Baker, president of the pro-Trump SuperPAC backed by billionaire Joe Ricketts.

Baker makes a claim so laughable that Stein can only laugh at it, because without a sheaf of documentation at the ready to refute people like this, they simply lie right to your face no matter how absurd the lie is. In this case, Stein points out that the conservative Committee for a Responsible Federal Budget has said that Trump’s plans add $5.3 trillion to the debt over ten years, while Hillary Clinton‘s only adds a tiny fraction of that. Faced with this devastating point, the president of “Ending Spending” has no choice but to try and lie his way out of it, and a flummoxed Stein can only laugh and say “alright”:

Stein: You’re talking about dynamic growth that will cover $5.3 trillion over years.

See what happened there? Sam Stein knows what the guy is saying is patently false, but since he doesn’t have a printout of the report handy, it ends up being liberal media reporter says one thing, guy says other thing, who can ever know what’s true? Even though the idea that the economy could grow enough to make up $5.3 trillion in revenue at reduced tax rates is absurd on its face, it gets left as a 50/50 shot.

As it turns out, though, the report both of them are citing does address the issue of economic growth, just not in its own model. That $5.3 trillion figure is, indeed, calculated without considering economic growth, which the group says it will tackle in a future analysis, but they did examine the Trump campaign’s claim that growth would magically make up the shortfall:

The Trump campaign estimates its tax and regulatory plans would increase real economic growth by roughly 75 percent, from 2.0 to 3.5 percent per year. If materialized, this faster growth would generate about $3.5 trillion of additional revenue, thus reducing the cost of Trump’s policies to less than $2 trillion in total. As we’ve shown recently, however, growth rates of or even near this magnitude are extremely unlikely to materialize.

So, based on the Trump campaign’s own estimates, the unrealistic growth they are promising would still leave a $2 trillion hole in the debt, which is still ten times what Hillary’s plan does, instead of the 30 times higher it is now. Baker isn’t just wrong, he’s lying. Even if everything Trump promises comes true, he’s still blowing up the debt like a nuclear missile compared to Hilary Clinton. The group also notes, of Hillary’s plan, that “Clinton has said she would pay for her infrastructure plan as part of business tax reform. If details of this reform were released, it could generate an additional $275 billion of revenue and result in modest deficit reduction.”