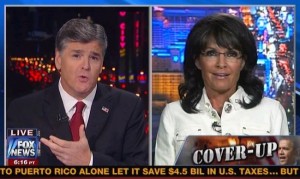 Sarah Palin and Sean Hannity continued to criticize the Obama administration’s foreign policy tonight, focusing in particular on the fact that the United States is paying thousands of dollars in order to air ads in Pakistan featuring President Obama and Hillary Clinton.

RELATED: Sarah Palin: Obama Is ‘Promoting Democracy’ In Nations That Do Not Share Values With ‘Civilized Societies’

Hannity bashed the administration for continuing to apologize for the controversial anti-Islam film. Palin said the Obama team was doing another “apology tour” while U.S. embassies in the Middle East are “under siege.” She argued that if the president is going to keep waving the white flag of surrender and “capitulate,” he might as well just bring the troops home. She added that the Obama administration is undermining the mission of the U.S. troops to “protect freedom.”

Hannity suggested that the administration is “protecting… the murderers of Americans” and wondered if the White House is also protecting al-Qaeda with its comments. Palin said that Obama is “weakening America” with his foreign policy, calling for a return to the days of Ronald Reagan. Hannity asked if the Obama administration was engaging in “premeditative lying” in order to protect their foreign policy reputation in the wake of questions about the planning of the Libyan attacks.

Palin said that Obama is “masterful” at dodging questions, and referred to him as more of a politician than a leader.

Hannity highlighted past controversial remarks made by Mohammed Morsi, the Egyptian president, and said that the United States should not be giving any more money to that country. Palin added that when the government is in transition, “we were told that they were harmless” and they would be allies of the United States, but that ultimately did not come to pass.