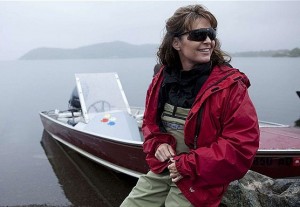 The reality TV gods have been very kind to Sarah Palin. Her own show, Sarah Palin’s Alaska is a certifiable hit, breaking ratings records for the normally stolid network TLC. Additionally, the former Governor’s own daughter Bristol Palin is a finalist on ABC’s Dancing With The Stars, affording Mama Palin plenty of invaluable network TV appearances in which the presidential hopeful comes off as a supportive and relatable mother. It seems odd, then, that leaked excerpts of Palins’ latest book are very critical of reality television (specifically American Idol), essentially “refudiating” the very genre from which she benefits so greatly.

Unless you’ve been living on an Arctic ice floe, you are well aware of Sarah Palin‘s evolving relationship with the mainstream media, and her own mega-budget, Mark Burnett-produced “reality” show. Many media critics have openly suggested that the reality show is nothing more than an expensive political campaign ad designed to demonstrate how normal Ms. Palin’s life is, but with exciting family adventures, each coincidentally proving the innate strength and decisiveness of the former Alaska Governor.

This is an example of “candid reality television,” and no one should ever confuse it with a documentary, a form who’s guiding ethos includes a strict rule that forbids filmmakers from ostensibly getting involved in their subjects’ actions. At the risk of stating the obvious, candid reality television encourages the intercession of producers and directors who often script out scenarios that optimize conflict — or strength and decisiveness — or whatever the goal of the show may be.

Sarah Palin’s Alaska is a textbook example of the form, a show in which producers and directors are not just standing behind the cameras asking prying questions, but are also likely scheduling the weekly adventures, casting the guides, and maybe even encouraging the male pal of daughter Willow to go upstairs in the Palin home, only to see the former Governor get her Mama Grizzly on. And no, I don’t know for a fact that a director encouraged any particular scene to work out the way it was depicted, but I do know, from a previous career of producing and directing both competitive and candid reality shows, that this is the sort of thing that happens on these kinds of programs.

Apparently, though, Ms. Palin is not a fan of all reality programs. Leaked excerpts of her new book reveal that in Palin’s esteem, the delusional contestants, or “talentless wannabes” who audition for American Idol, despite having no clear ability to find a tune, let alone carry one, are symptomatic of a much deeper problem.

While the original leaked book excerpts have been removed by Gawker by court order, Free Republic still has the specific bit in which Palin critiques American Idol:

On American Idol, of course, these self-esteem-enhanced but talent-deprived performers eventually learn the truth. After they’ve embarrassed themselves for the benefit of the producers, they are told in no uncertain terms that they, in fact, can’t sing, regardless of what they’ve been told by others.

There is something rather bizarre about this stage of American Idol, and the delusions of endless contestants who lack any self-awareness is a strangely American phenomenon. But picking on those kids? Well, its sort of picking on a remarkably easy target. But it gets more interesting:

But in the wilder world, these kinds of instances of hard-truth-telling are increasingly rare. Instead of eventually confronting the limits of their inflated egos when it comes to paying the rent and putting food on the table, Americans are increasingly being told not to worry about it. Someone else will provide for them.

This is a remarkable syllogistic leap, regardless of how one feels about American Idol, or an inherent sense of entitlement pervasive in society today. I’m not sure I’ve ever met anyone struggling to put food on the table because they lack self-awareness or feel entitled to be a pop star, though in fairness, Palin was speaking metaphorically. Applying that metaphor to the jobless, Palin seems to think that at least some jobless Americans are just aiming too damn high.

Perhaps even more interesting is the contrast between Idol, and the popular competitive reality show that currently stars Palin’s own daughter, Bristol. Dancing With The Stars is a complete inversion of the American Idol formula that argues that anyone who is famous can be made into a good dancer, regardless of innate talent or utter lack of experience in dance.

Amid a conspiratorial controversy surrounding alleged voter fraud by Tea Partiers eager to see young Bristol advance, there has been another, perhaps more poignant charge surrounding the Palin’s involvement in DWTS. Washington Post is suggesting that Ms. Palin’s numerous appearances on the hit reality show have had more to do with promoting her political future than supporting her daughter.

Which brings us back to Mama Grizzly herself, Sarah Palin. The former Governor of Alaska and VP candidate who now has her own record-breaking reality show, and a daughter who has leveraged her mother’s fame to get on another reality show. None of it makes sense, and yet it makes perfect sense, all at the same time.

Ironically, Sarah Palin is more like the auditioning American Idol individuals that she derides in her book than she may believe. She was plucked from relative obscurity on to the national stage, before she was ready for the national spotlight. No, Ms. Palin didn’t win her contest, she came in second. But like Clay Aiken before her, despite not having won, she has sold like gangbusters, built a massive fan base, and become a punchline all at once.

Sarah Palin’s turn as a reality star is not unlike other opinion media of today; her homespun folksiness appears to reinforce a viewers predisposition towards the presidential hopeful. If one finds her down-to-earth and evocative of a common sense do-it-yourself ethic, then you see her as such. If one perceives her a manufactured and phony lightweight, well that is an option as well.

The bottom line? Sarah Palin is the ultimate reality star, even if her show — and public persona — has very little to do with reality.