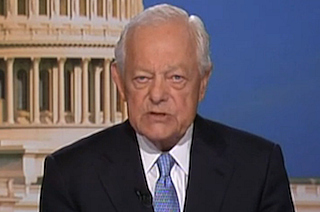 Bob Schieffer excoriated NSA-leaker Edward Snowden on Face the Nation this morning, not as a traitor but as a coward who fled the country rather than accept responsibility for his actions.

“I like people who are willing to stand up to the government,” Schieffer began. “As a reporter, it’s my job to do that from time to time. Some of the people I admire most are in the government. Men and women who led the civil rights movement— Rosa Parks, Martin Luther King, Jr.—they are true heroes. I’m not ready to put Edward Snowden in that category. For one thing, I don’t remember Martin Luther King, Jr. or Rosa Parks running off and hiding in China. The people who led the civil rights movement were willing to break the law and suffer the consequences. That’s a little different than putting the nation’s security at risk and running away.”

Schieffer was careful not to let his disapproval of Snowden be misconstrued as complete acceptance of the surveillance Snowden revealed, but was also careful to criticize a program about which he knew little.

“I know eleven people who died or lost a member of their family on 9/11,” Schieffer said. “My younger daughter lived in Manhattan then. It was six hours before we knew she was safe. I’m not interested in going through that again. I don’t know yet if the government has over-reached since 9/11 to reinforce our defenses, and we need to find out. What I do know, though, is that these procedures were put in place and are being overseen by officials we elected and we should hold them accountable.”

“I think what we have in Edward Snowden is just a narcissistic young man who has decided he is smarter than the rest of us. I don’t know what he is beyond that, but he is no hero. If he has a valid point—and I’m not even sure he does—he would greatly help his cause by voluntarily coming home to face the consequences.”