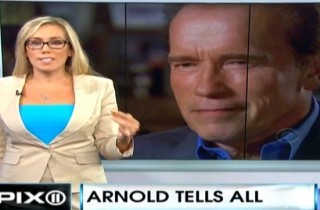 Former California Gov. Arnold Schwarzenegger sure said a lot last night on 60 Minutes. I know this because cable news has spent a good chunk of the day playing the clips where he says cheating on Maria Shriver was “the biggest mistake” of his life.

But apparently WPIX-NY doesn’t think the Governator said enough… you know, with just his mouth alone… so they turned to certified PhD in Body Language Studies (not really) Tonya Reiman to tell us what Ahnold really meant to say when he delivered before millions of viewers.

According to Reiman, apparently Schwarzenegger doesn’t just play robotic characters; he really is a robot. He is trained, she tells us, to show us what he wants us to believe — but, in reality, sometimes a little human emotion will slip by all the computing. He’s begging for us to know how he truly feels inside, but he just can’t say it. But only those with degrees in reading facial cues can decipher such buried emotions.

Reiman also evaluated Lesley Stahl‘s slightly-tilted head which we learned indicates a “cold shoulder” and that she doesn’t want to be talking to the former governor. Hmm. She may not like him but I’m guessing her head is held pretty high about getting the exclusive! As for Schwarzenegger, his tongue and upward head-tilt indicate “arrogance and superiority.”

Right. Or maybe that’s just the way an immensely successful Hollywood actor and former Governor’s face moves as he reacts during a clearly uncomfortable interview that involves bearing his soul over a truly embarrassing chapter of his life? Whatever. Same thing.

Schwarzenegger also nodded slowly, with a slight smirk, as Stahl reminded him of how terrible his affair was for everyone involved. Playing the nod in slo-mo, Reiman insisted the actor was secretly trying to convey “contempt” for the interview, and Stahl’s forehead touch was her secret way of conveying annoyance, almost like “you’re giving me a headache!” Arnold’s tongue makes a small cameo again, and Reiman says that “superiority” is back, indicating he doesn’t believe he has to answer these questions. Fascinating.

STAHL: I am giving you the cold shoulder. I do not want to talk to you.

SCHWARZENEGGER: I am superior to you. I am arrogant.

SCHWARZENEGGER: I have contempt for you. My tongue indicates that.

SCHWARZENEGGER: I am superior to you. I don’t have to answer this.

Reiman concludes her demonstration: “Verbally, he’s trying to tell us the truth; but non-verbally, he’s telling us how he actually feels.”

These “body language expert” segments are about as painful to watch as an interview with Donald Trump about birtherism, but they aren’t going anywhere, particularly on local news stations who have nothing else to add… apart from maybe: “The 60 Minutes interview with Arnold Schwarzennager, how it could affect your pocketbook.”

Watch below, via WPIX: