Shep Smith Lays Into GOP Rep. for Saying Assad Can ‘Continue to Kill His Own People’ 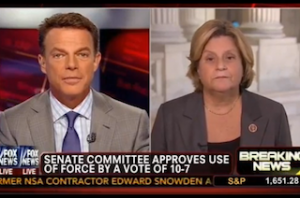 Rep. Ileana Ros-Lehtinen (R-FL), who chairs the House Foreign Affairs Subcommittee, stepped out of today’s hearing on Syria to speak with Fox News’ Shepard Smith this afternoon and ended up in a far more contentious argument that she could have anticipated.

Ros-Lehtinen began by saying many of her initial concerns of U.S. military action in Syria have been “alleviated” by the hearing, especially Secretary of State John Kerry’s assurances that there will be no “boots on the ground.” When she suggested that the Arab League could assist the U.S. in the operation, Smith began pushing back hard.

“The Arab League has emphatically said no,” Smith corrected the congresswoman. “The British are against it. There’s not a nation on the planet, congresswoman–with great respect and admiration–not a nation on the planet that said if you go do this, we’re right there with you.” As for the question of “boots on the ground,” Smith laid out a worst case scenario and asked if the U.S. is prepared to “stir a hornets’ nest that will leave us in full-scale Middle East war.”

When Ros-Lehitinen began defending the United States’ responsibility to hold a “murderous thug” like Bashar al-Assad accountable, Smith countered by laying out the parallels with the Iraq War. “I’m not equating the two things, but I’m saying that our nation is weary,” Smith said. “Why in the world would we bother, when we haven’t even suggested that what we’re doing might stop the slaughter?”

The congresswoman defended the limited scope of the mission by saying that in effect it is telling Assad, “you can continue killing your own people, you just can’t kill them with chemical gas.”

“How do you feel about that message?” Smith asked. “That just doesn’t sound like you.” When she described the current plan as the least bad option, Smith said, “If every option you have is a bad option, and the one you’re considering costs lots of money and has lots of risk, why don’t you sit here and go ‘wow, we might let somebody else take care of this.'”