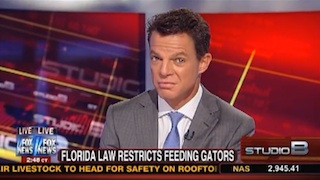 I love the Studio B legal conversations. Even on fairly boring days (perhaps especially on boring days), Shepard Smith and his team can find the one bead of interest in any story. Take for example a segment today with Smith, along with Arthur Aidala and Randy Zelin, discussed the case of a Florida man charged with illegally feeding an alligator when he tried to give it a fish and, instead, had his hand bit. I’d say more about the case but, really, who cares (I mentioned it was a boring day, right?)? What really matters is the team attempting to guess what caused Florida to have to warn its citizens not to “molest” gators.

It all began as Aidala tried to argue that the man needed to be prosecuted since the Florida authorities have clearly marked signs telling people not to “feed or molest” the animals. Smith said he loved those signs and explained them away by informing viewers that “It’s Florida, they use weird words.”

However, perhaps realizing that this was a much more fun topic than the story at hand, Smith continued, asking his panel what they think the first case was to cause Florida to include the “molest” rule. He then stared at them with an expression that I can’t properly describe except to say that, were Studio B nothing but an hour of that expression, it’d still be better than 90% of cable news shows.

If you have to fill out a program by talking about dudes getting bit by alligators, this is probably the best way to do it.