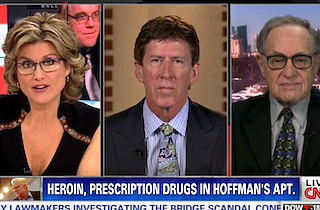 A long time ago last fall, CNN hired George Zimmerman defense attorney Mark O’Mara as a legal analyst, setting the network up for an infinite number of bonzo news juxtapositions like this one: today O’Mara and host Ashleigh Banfield debated Alan Dershowitz over whether the dealer who sold Philip Seymour Hoffman the heroin that killed him should be tried for murder. (And also we should legalize heroin maybe?)

Dershowitz called the hypothetical murder charge an “absurd misapplication of the law,” causing Banfield to grill him on whether drug dealers were worse than drunk drivers.

“This is a guy who was going to get his heroin no matter what,” Dershowitz said. “If he didn’t get it in the country, he would get it out. This raises the big issue, if we should be decriminalizing all these drugs, making them into a medical issue.”

“You are smarter than I am, but I will never leave this without saying that the guy who gave an addict the drug that killed him deserves to go away for life,” Banfield said.

“What about the guy that gave the addict the drug that didn’t kill him?” Dershowitz asked. “You’re playing Russian roulette. In this particular case, he died. In many cases, they don’t. You are going to pick a scapegoat and put this guy in jail for all the crimes that all the other addicts did?”

“The government has done a number of different things to hold people responsible,” O’Mara countered. “I like the idea of saying to somebody, ‘If you give a drug that causes a death, we’re going to hold you responsible.’ Only because I think we have to go up the ladder to get to the people and let them know, dealing drugs can put you in prison for life.”