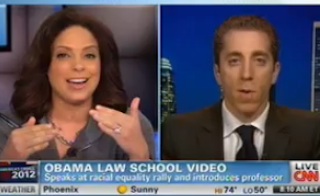 CNN’s Starting Point got heated Thursday as Breitbart.com’s Editor-In-Chief Joel Pollak clashed with host Soledad O’Brien about the significance of the video of President Obama hugging a Harvard professor. O’Brien didn’t quite understand why the recently publicized video was a “bombshell.”

“What part of that was the bombshell? Because I missed it. I don’t get it,” O’Brien exclaimed. “What was a bombshell?”

“Well, the bombshell is the revelation of the relationship between Obama and Derrick Bell,” Pollak pointed out.

“Derrick Bell is the Jeremiah Wright of academia,” Pollak stated. “He passed away last year, but during his lifetime, he developed a theory called critical race theory, which holds that the civil rights movement was a sham and that white supremacy is the order and it must be overthrown.”

“In what way is it a critical misreading?” Pollak countered. “Can you explain to me? Explain to your readers (sic) what it is,”

“I’m going to ask you to continue on,” O’Brien quickly replied. “I’m just going to point out that that is inaccurate. Keep going. Tell me what the bombshell is. I haven’t seen it yet.”

“Well, wait a minute!” Pollak interjected. “You’ve made a claim that my characterization of critical race theory as the opposite of Martin Luther King is inaccurate. You’re telling your viewers that, but you’re not telling them what it is.”

“Critical race theory looks into the intersection of race and politics and the law and as a legal academic who would study this and write about it, he would advance the theory about what exactly happened when the law was examined in terms of racial politics,” O’Brien explained. “There is no white supremacy in that. It is a theory. It’s an academic theory and as one of the leading academics at Harvard Law School, he was one of the people as part of that conversation. So that is a short definition.”

The two argued over the relevancy of critical race theory to the conversation, with O’Brien trying to move things back to the “bombshell” and Pollak saying, “You can’t derail this, Soledad.” O’Brien eventually concluded that Pollak wanted to make the connection between Obama and the “radical” Bell. Pollak accused O’Brien of obfuscating the real issue, which was the media sweeping things under the rug, and O’Brien began to accuse Pollak of still not understanding critical race theory.

Then Panelist Jay Thomas interjected. He asked if Pollak was afraid that a secret black movement was going to rise up and murder him. Pollak responded by saying he was just accused of being a racist and afraid of black people, but answered Thomas’ query anyway.

“At every point in his life when he could have followed the path of Martin Luther King, he threw in his lot with the Jeremiah Wrights and the Derrick Bells of the world,” Pollak said.

GBTV’s Amy Holmes then chimed in, wondering why the raw video didn’t surface in 2008.

“Of what?!” O’Brien exclaimed. “Of hugging Derrick Bell, the renowned Harvard Law Professor?”

Holmes countered by saying that it should have been something, “for the public to decide, not the media to decide,” and that the media, “did not allow this to be put into the public square.” She then made a stellar observation that she was a vegetarian in college and now enjoys prime rib. It’s not about digging something up on Obama, Holmes explained, it’s about the media not putting it out there.

Watch the explosive segment below, via CNN: