Video: So Mitt Romney Can Stand Up To Rush Limbaugh 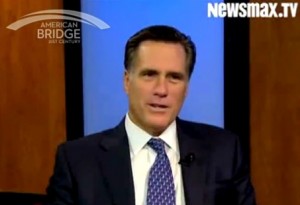 Former Massachusetts Governor Mitt Romney has come under fire for his failure to denounce embattled radio giant Rush Limbaugh‘s sustained verbal assault on student and activist Sandra Fluke, both from the left and the right. Yesterday, Obama campaign strategist David Axelrod wondered, if Romney can’t stand up to someone like Limbaugh, “how are you going to stand up to (Iranian President Mahmoud) Ahmadinejad?”

Thanks to a video unearthed by progressive SuperPAC American Bridge, we know he can stand up to Limbaugh, he simply chose not to in defense of women.

In a March 8, 2010 interview with conservative website Newsmax, Romney took Rush on, albeit meekly, in defense of Arizona Sen. John McCain:

NEWSMAX: Rush Limbaugh says you made a grave, grave error in endorsing John McCain over JD Hayworth in the Arizona Republican primary. “The era of McCain is over,” says Limbaugh. What say you?

ROMNEY: Well, you know, I find it hard to disagree with Rush Limbaugh on topics, but on this one I do. I know Senator McCain. I think his experience in the military, in the Senate, and the wisdom and judgment which he has developed over a lifetime is something which we need in the Senate. I think it serves our country well.

Sure, that’s not exactly jawboning (more like a gentle jaw massage), but even a response like this would have been better than what he gave to reporters about Limbaugh’s attacks on Ms. Fluke. “Well, you know, I find it hard to disagree with Rush Limbaugh on topics, but on this one I do. Women who want insurance to cover their birth control are not sluts” isn’t exactly going out on a limb, and would have undoubtedly helped Romney with independents and moderates who are, or know any, women.

SuperPACs have become one of the central stories of this campaign, and while progressive groups like American Bridge and Priorities USA are massively outgunned in the money department, that deficit is somewhat mitigated by their smart allocation of resources.

While Republican SuperPACS have dumped money into slickly-produced, overwrought (but admittedly effective) attack ads which aggregate (and spin) existing news coverage, American Bridge has brought added value to their work by digging up hard-to-find clips like this and sending opposition video trackers out to Republican campaigns. Although they can’t afford to blanket the airwaves the way Karl Rove and the Koch brothers can, putting out content that isn’t already out there gives them the opportunity to get free exposure from news outlets.

For example, with the Limbaugh controversy still burning brightly, this clip, which is no longer available on the Newsmax website, is likely to be picked up on by national news organizations. There’s a cumulative effect, too. Reporters get countless emails from political operations pitching stories, but with a track record of uncovering interesting and newsworthy items, they’re a lot more likely to check out an email from an organization like American Bridge.