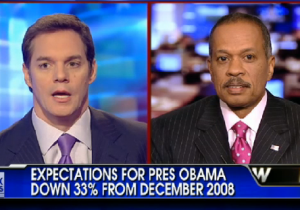 Researchers at the University of Maryland have released a study of news viewers entitled, “Misinformation and the 2010 Election” (.pdf) and found news viewers often get the wrong idea on major stories, and–according to the study–Fox News viewers are the “most misinformed” of them all.

Of course, one could argue that the academic world is the province of progressive thought, filled with many individuals who’ve developed a distaste in Fox News’ unique brand of opiniotainment. Nonetheless, the study is interesting regardless of one’s point of you and even suggests that the more someone watches Fox, the more misinformed they get.

According to the researchers, daily Fox News viewers–regardless of their political party affiliation–were “significantly” more likely than non-Fox viewers to believe:

The economy is getting worse (26 points)

The stimulus legislation did not include any tax cuts (14 points)

Their own income taxes have gone up (14 points)

The auto bailout only occurred under Obama (13 points)

But it’s not just Fox News viewers who are misinformed, as Talking Points Memo reports:

“The latest Princeton Review ranked the University of Maryland among the top schools for having ‘Students Who Study The Least’ and being the ‘Best Party School’” adding “given these fine academic distinctions, we’ll regard the study with the same level of veracity it was ‘researched’ with.”