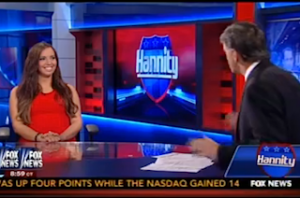 As promised, Sydney Leathers appeared on Hannity tonight to discuss her unusual relationship with New York City mayoral candidate Anthony Weiner. She even added one more revelation about Weiner to the ever-growing list. The conservative Weiner disliked the most? Sean Hannity.

Leathers said she thought Hannity might “attack” her because of their obvious political differences, before she realized in “taking down a Democrat” she had endeared herself to the pundit. She began by retelling the story of how she courted Weiner on Facebook before he took their relationship to the next level. She said eventually they were having phone sex up to five times a day.

Asked what she’s learned from this whole experience, Leathers said that beyond deleting her Facebook account she learned “don’t meet your heroes.” She said, “you realize how human they are, they have flaws, they’re definitely not who you think they are.”

On Weiner’s specific hatred for Hannity, Leathers said she was expecting him to say one of his colleagues in the House, for instance, “Michele Bachmann or some nut I don’t like,” when she asked him which Republican he hated most. “But, instead he said you.”

After a break, Hannity had Leathers react to some recent quotes from Weiner, including the f-bomb he dropped during his BuzzFeed Brews interview. Asked if there’s a side to Weiner that would shock average Americans, Leathers said yes. “Oddly enough,” she added, “I kind of enjoy that side of him.” Before leaving the set, she told Hannity, “Have fun on Fox News.”