Sympathy For A Devil: CNN’s Don Lemon Says He Felt ‘A Bit Sorry’ For Jerry Sandusky 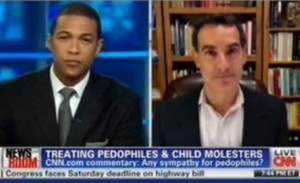 During a CNN Newsroom segment on the “science” of pedophilia, anchor Don Lemon told guest contributor Dr. James Cantor that he felt a measure of sympathy for convicted child rapist Jerry Sandusky. “I know people are going to send me a lot of hate mail for this,” Lemon said. “I’ve never been one to take glee in anyone’s demise, and when I saw Jerry Sandusky walk out in handcuffs, I did kind of feel a bit sorry for him, even though the jury found him to do some horrific things, I was like ‘His life is over.'”

Before I continue, let me just say this: No, Jerry Sandusky’s life is not over. He faces up to 400 years in prison, and if there’s any justice, he’ll spend as many of those years as possible in gen pop, with people who know exactly what he did. F**k Jerry Sandusky.

But while Lemon is probably correct that he’ll receive hate mail over this, I hope he doesn’t. Lemon, himself, has revealed that he is a survivor of childhood sexual abuse, which shouldn’t disqualify him from reporting on the subject, but ought to be factored into the decision to blast him. A far greater likely contributor to Lemon’s misguided sympathy is guest Dr. James Cantor’s ill-founded declaration that “Pedophiles are born, not made.”

The segment was pegged to a CNN commentary in which Cantor talks about scientific studies of pedophilia, and urges increased emphasis on treatment to prevent child molestation. While he declares, on the air and at the beginning of his piece, that “One cannot choose to not be a pedophile,” the data he quotes doesn’t support that conclusion at all: (emphasis mine)

Pedophilic men have significantly less white matter, which is the connective tissue that is responsible for communication between different regions in the brain. Pedophiles perform more poorly on various tests of brain function, tend to be shorter in height and are three times more likely to be left-handed or ambidextrous (characteristics that are observable before birth). Although nonbiological features may yet turn up to be relevant, it is difficult, if not impossible, to explain the research findings without there being a strong role of biology.

I’m not a scientist, but this looks to be heavy on correlation, and light on causation, and Cantor doesn’t see fit to mention that white matter deficiencies are also correlated to people with other, non-pedophiliac mental disorders. He also neglects to mention research linking pedophilia to brain injuries due to trauma or alcohol abuse.

Cantor’s evidence might seem compelling to a non-scientist, but all of these correlations mean absolutely zip in terms of diagnosing pedophilia. You can’t pick a bunch of short, left-handed, poor test-takers out of a crowd and haul them off for reconditioning. None of these studies control for unreported offenders.

This is where Cantor’s central point, that intercepting and treating pedophiles before they become child molesters, is undermined by his apparent ignorance of the extent to which child abuse, including child sexual abuse, goes unreported. Cantor writes:

Cases of child molestation that involve long strings of victims over the course of years illustrate what can happen when someone gives in to, or outright indulges, his sexual interests, regardless of its potential damage on others. It is those cases that dominate headlines and provoke revulsion toward pedophiles.

But they are rare. An untold number of cases merit sympathy.

How, exactly, do you determine that a crime that is under-reported by as much as 90% is “rare?”

During his interview with Lemon, he also refers to pedophiles who don’t act on their attraction as “Gold Star Pedophiles,” a disturbing way to frame what ought to be the default setting for human beings. Children aren’t capable of consensual sex (which we call “sex”), so there’s nothing “admirable” about resisting the urge to rape them.

Cantor does draw a very bright line, though, between pedophiles who haven’t acted on their urges, and predators like Jerry Sandusky. Asked if Sandusky deserved sympathy, Cantor told Lemon, “the people who actually engage in those behaviors, they need to be dealt with on the basis of what it is they did. There’s nothing in any research that some are not responsible for their behavior.”

That’s a bit of a Catch 22, because if you don’t report them, there’s a good chance they will go on to victimize children. There’s a high recidivism rate among pedophile sex offenders, and limited forms of treatment. Given the choice, it seems preferable to err on the side of protecting children, not pedophiles.