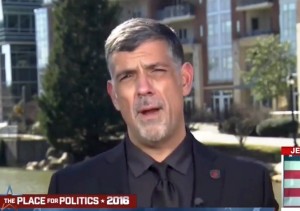 For Americans worried about the possibility of a presidency that conflicts with their own faith, or lack thereof, the Ted Cruz campaign has news for you: that whole “separation of church and state” thing is just a myth, so they might as well sit back and enjoy the Godly ride. In an interview with MSNBC’s Joy Reid over the weekend, the Cruz campaign’s South Carolina Evangelical Chairman Pastor Mike Gonzalez explained that a Ted Cruz presidency would be guided by faith, but would also uphold the constitution, where that whole “myth” originates, and reid pushed back on him:

Gonzalez: Well, the reality is that this idea of the separation of church and state is a myth. I mean, you bring your faith into the marketplace like you do anything else. So tTed Cruz is a — will be a president not just, you know who is a preacher and pastor in the White House, That’s not the idea. I believe all Americans can rally around Ted Cruz because he upholds the constitution. I believe all Americans want to truly uphold the law.

Reid: Let me just push back on you a bit. The separation of church and state is not a myth, it’s a constitutional fact. It’s a fact on the ground. It’s a part of our constitutional makeup. The founding fathers were explicit that they did not want to have a national church. Can a candidate like Ted Cruz run on essentially saying he would ignore that part of the constitution, if you’re saying he’s a president who would actually run on the constitution?

Pastor Gonzalez’ assertions to the contrary, non-Christian Americans might have good reason to fear a Cruz presidency. Unlike many other liberls, I’m not the sort who gets into a lather about candidates and their religion, but Cruz is a different animal than most. Pastor Gonzalez is correct that any candidate is going to be informed strongly by their beliefs, but unlike the other candidates, Cruz has explicitly said that if there were ever a conflict between his duties as an American and his Christian beliefs, he would choose the latter:

“I’m a Christian first, I’m an American second, I’m a conservative third, and I’m a Republican fourth, and that’s part of the problem, is that there are too many people who don’t have that ordering correct.”

That’s all well and good if you’re on Ted Cruz’s rapture roster, but if you’re not, then maybe you want a president who is an American first, or at least in a tie. When President Cruz is kneeling at the Resolute Desk, it would be nice to know he’s asking God what would be best for America, not what the best way to bring about the End Times might be.