Ted Nugent Attacks Piers Morgan For His ‘Obsession’ With Guns: ‘Will You Leave Us The Hell Alone?’ 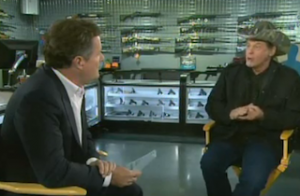 When Ted Nugent sat down with Piers Morgan in Texas tonight, he delivered the CNN host his most explosive interview since last month’s showdown with Alex Jones.

Morgan began by asking Nugent to explain to him, “in the least inflammatory way possible” why Americans need the AR-15 assault rifle. When Nugent began talking about the millions of Americans who own guns and have “never caused a problem, never had an accident and will never commit a crime,” Morgan responded by listing off the number of gun murders and suicides each year in this country.

Morgan answered, “I care about all death.”

“I don’t think you do,” Nugent shot back. “I think you care about guns. You’re obsessed with guns.” He then went off on a tear that summed up his and many other gun advocates’ position:

“99.99% of the gun owners of America are wonderful people that you are hanging around with here today. Perfectly safe. Perfectly harmless. Wonderful, loving, generous, giving, caring people. Would you leave us the hell alone? Go after the nut jobs, go after the murderers, because I don’t know any. We need to lock up the bad guys and when people show dangerous, murderous intent, which everyone one of these mass murderers showed — all their neighbors, their family, their teachers, their fellow students, they all knew they were crazy but, Piers, we didn’t stop them because we’re worried about hurting their feelings. We have a mad man problem in America… let’s focus on that and leave the rest of us alone.”

When Nugent was done, Morgan told me, “I won’t leave you alone because there’s a debate that needs to be had.” After a break, he asked Nugent to respond specifically to President Obama’s gun proposals.

Nugent proceeded to slam the “scammer-in-chief” on everything from Benghazi to Egypt, saying he was re-elected by a “clueless majority.” “I don’t agree with President Obama on any of this.” Asked if he thinks America will be safer now that semi-automatic guns and ammo are flying off the shelves in places like Texas, Nugent said “Absolutely. An armed society is a polite society.”

And when Morgan brought up that Nugent already accepts some limits to the second amendment by accepting that he cannot have an “armored tank” outside his house, Nugent responded, “Are you sure about that?”