The Cardboard Bike Is Real, And It’s Waterproof

The Cardboard Bike Is Real, And It’s Waterproof 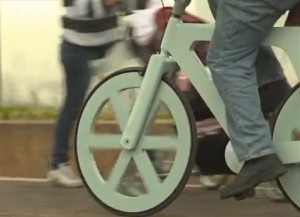 On Monday night’s The Colbert Report, eponymous fundit™ Stephen Colbert referenced a revolutionary new mode of transportation in his cold open, joking that “the inventor of the cardboard bike says it will change the world. Provided that change includes never raining again.”

The cardboard bicycle has been in the works for years, the brainchild of 50 year-old Israeli inventor Izhar Gafni, but as it nears production, the bike has been getting more media attention recently. On Tuesday morning’s Morning Express, anchor Robin Meade and meteorologist Bob Van Dillen bantered about the innovative two-wheeler. After Meade introduced the topic, Van Dillen joked “Great. You can’t take it out in the rain or wind over three miles per hour. But it’s great.”

“What do you use for the chain?” Meade asked.

“Fantastic,” Van Dillen snarked. “but you have to be under 40 pounds to use it.”

I get that it was only a 15-second fluff bumper on a morning show, but Meade could have actually read the article she used a screenshot of:

Once the shape has been formed and cut, the cardboard is treated with a secret concoction made of organic materials to give it its waterproof and fireproof qualities. In the final stage, it is coated with lacquer paint for appearance.

In testing the durability of the treated cardboard, Gafni said he immersed a cross-section in a water tank for several months and it retained all its hardened characteristics.

…”These bikes need no maintenance and no adjustment, a car timing belt is used instead of a chain, and the tires do not need inflating and can last for 10 years,” (Gafni) said.

Gafni says the materials for the bike cost about $9, and he thinks it will sell for about $20. Because he expects government green credits to erase the cost of production, Gafni envisions a business model in which the cycles are given away in poor countries, and the money is made through advertising on the bikes themselves.

Here’s a short film about the inspiration, design, and construction of Gafni’s pretty amazing cardboard bike: