The Five to Lee Daniels: America Not More Racist After Obama
VIDEO 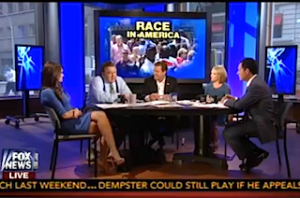 Director Lee Daniels, of Lee Daniels’ The Butler fame, made some provocative comments about racism in America on Piers Morgan Live last night that did not get past the hosts of The Five. This afternoon, The Five crew took Daniels to task for suggesting that racism has gotten worse since President Obama was elected and that some people are “angry” that he’s president.

Dana Perino was the first to challenge Daniels’ notion, saying “I look around and I think at the highest levels of government, some of the best entertainers, all across journalism and media, all across business, you have lots more diversity than when I was a kid. I think we’ve come a long way. I think personally I’ve come a long way. I don’t think it is worse than before.”

For Brian Kilmeade, it all came down to one simple question. “Does President Obama get elected without white people voting for him? Absolutely not.” He also argued that people “hated” Presidents George W. Bush and Bill Clinton and it had nothing to do with race. Even if people do “hate” Obama, he argued, “I don’t see the resentment because he’s black.”

Even Bob Beckel hit back against Daniels, saying, “To suggest anything about Barack Obama, people hating him because he is black, I don’t buy that a second.” He admitted that “there are people who are racist didn’t like him to start with,” but asked, “Is racism worse today? I don’t think so.”

Putting a positive spin on the whole thing, Kimberly Guilfoyle said, “We have a black president. We have many people in positions of power and influence running this country and contributing from all different walks of life, different socioeconomic backgrounds, different ethnicities and I think it’s a great place to be.”