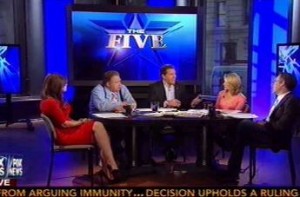 News broke yesterday that authorities had charged three new suspects, two of whom attended UMass Dartmouth with Dzhokhar Tsarnaev, in the Boston Marathon bombing case. This afternoon Fox News’ The Five examined the warning signs that could have tipped off police and the school to the potentially dangerous students, including a vanity license plate that read “Terrorista #1.”

Greg Gutfeld was particularly disturbed by the fact the college, UMass Dartmouth, is reportedly refusing to release the suspects’ records. Bob Beckel defended the school, saying those records are always kept private.

But Dana Perino didn’t want to let UMass Dartmouth off so easy, “I think we should all be able to agree, there should be 99.9% agreement, that if you terrorize Americans, your right to have your records private goes away, immediately. Dissolves on contact.” Perino also questioned how one of the suspects, Azamat Tazhayakov, was able to stay in the dorms after he had overstayed his student visa, a concern expressed by Sen. John McCain (R-AZ) yesterday on Fox.

Beckel, who was one of the first to make the controversial suggestion that the U.S. stop giving student visas to Muslims, was pleased to see McCain appearing to get on board with his idea. “By law [schools] need to turn over the names of students who have not showed up at the school or dropped out and are here on student visas.” He added, “The colleges don’t seem to be taking this very seriously.”