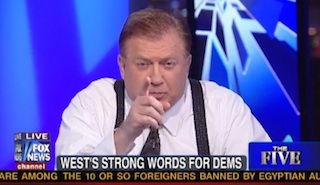 On Fox News’ The Five, co-host Bob Beckel has a usual batch of ways in which he shows how angry he is about a subject. There’s “Muffled Curse Words” Beckel, where he lets the audience know what he really thinks by saying the beginnings (and just that) of all sorts of fun words. And there’s “Silent, Arms Folded” Beckel, my personal favorite, who gets so upset about a subject he refuses to even talk about it. Whatever the case, he usually seems like he’s mostly joking around. Today though, we saw a new color of angry from Beckel; a genuine, righteous anger. The target of his rage was Rep. Allen West who, this weekend, argued the incredibly well thought out and intelligent proposal that President Obama and the rest of the Democratic leaders should “get the hell out of the United States of America.”

RELATED: Rep. Allen West Tells Obama And Democratic Leaders To ‘Get The Hell Out Of The United States’

Saying that he was going to try to remain as calm as he could, Beckel went off on West.

“In my 30 years of politics, I have never heard anything more disgraceful in my life. I think that Allen West owes an apology to a lot of people. He’s lucky to have that seat in the first place. I’ll tell you this, Mr. West; When you start shooting your mouth off like that – and I admire that you were in the military and you served your country. I understand that. But before you start saying that, at the end of it, you said ‘Get the hell our of the United States,’ then you didn’t say the policies. Now, there’s 20% of us or 22% of us that happen to be Progressives, who believe in what Harry Reid and Nancy Pelosi say. You go on to say 100% of America. We’re 20% of America and we’re not going anywhere whether you like it or not.”

Beckel’s co-hosts all tried to defend West but they did little to dissuade his offense. Greg Gutfeld tried to argue that, after listening to outspoken black liberals “for 20-30 years,” it was awesome to hear one for conservatives (Watch out you don’t dip into Ann Coulter “Our blacks are better than your blacks” territory there, Greg…). Dana Perino argued that West was just talking about “messaging” and doesn’t really want anyone to leave the country. Eric Bolling kept bringing up West’s service.

However, the least successful in persuading Beckel was Kimberly Guilfoyle:

GUILFOYLE: [West] was exercising his freedom of speech which he is entitled to.

BECKEL: He told us to take ours out.

While there have certainly been segments of The Five that were louder, this was the most genuinely offended we can remember Beckel seeming. Perhaps because he was so intense in his condemnation of West, he was brought back out at the end of the show to give a special message saying that, while West was wrong, both sides have people on the fringe.

And that, folks, is how we all remain friends.

Watch both clips from Fox News below: