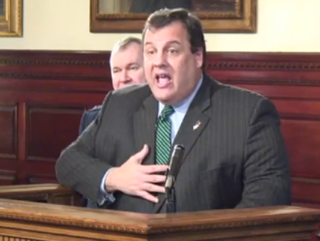 Will there ever be a news cycle without a “Gov. Chris Christie yelling at people” story ever again? Not anytime in the near future, apparently. The Governor, who is currently pushing a ballot referendum on same-sex marriage in the state, took a moment today to discuss allegations that his comparison of the issue to those of race in the middle of the past century, which he found extremely offensive. Explaining that, unlike the LGBT community, a ballot referendum on civil rights “wasn’t an option,” Christie berated one state legislator who compared his stance to that of George Wallace as “numb nuts.”

RELATED: Gov. Christie: Newt Gingrich ‘Has Been An Embarrassment To The Party’

Christie began by explaining a comment earlier in the week about civil rights in the South, and how a referendum could never be possible the way it could be for same-sex marriage in New Jersey. He admitted that his comparison may have been “inartful,” but he noted that many clamoring for a same-sex marriage law argue that “the public in New Jersey wants it.” “What I said was, that was not an option for [civil rights in the South] because the political climate in the South would not have permitted a referendum to have any chance of passage.” He compared the comments to a joke he made about “taking a bat to [State Senator Loretta Weinberg]” and then turned to those attacking him.

“You have numb nuts like Rep. Reed Gusciora, who put out a statement comparing me to George Wallace and Lester Maddox!” Christie chided. “At some point you’ve got to be able to call BS on these press releases.” He noted that Wallace and Maddox weren’t “advocating for urban education,” and concluded that “those who say things like that should be ashamed of themselves.”

The clip via the Star Ledger below: