The Five Hosts Denouce Eric Holder’s ‘Lies’ On Rosen Case: ‘He Should Be Held In Contempt’
VIDEO

The Five Hosts Denouce Eric Holder’s ‘Lies’ On Rosen Case: ‘He Should Be Held In Contempt’ 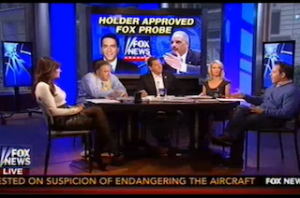 “Whoa, are you ready for your blood pressure to hit the roof?” That’s how Eric Bolling opened The Five Friday afternoon before delving into the news that Attorney General Eric Holder personally signed off on the order to issue a warrant on Fox News reporter James Rosen’s communications records. This led to a discussion from the group about whether Holder lied under oath during his House hearing and what it means that he’s been put in charge of the Justice Department review on these issues.

Bolling played a clip from Holder’s hearing in which he said of subpoenaing journalists, “that is not something that I’ve ever been involved in or heard of or would think would be a wise policy.” The host asked the panel: what happens if it turns out he was lying?

Kimberly Guilfoyle went right for jugular, unloading on Holder. “He should be held in contempt. This is a crime as far as I’m concerned. And this is the man that is the head of the Justice Department? Wow. Were they short on resumes? I mean, this person is proved himself to be completely unsuited for this job. I don’t think he has any credibility left. When his lips are moving, it seems to me that he’s lying. That’s the problem.”

Dana Perino said that while the attorney general is a “very busy man” and can’t have his fingers in everything, “I would hope that this is unprecedented, that it would be something that would stick out in your mind.”

If anyone was going to defend Holder, it would have been Bob Beckel, but he didn’t seem up to the task, calling the attorney general a “political liability” now that even The Huffington Post seems to be against him. “I think he’s probably going to find himself out of work.”

Bolling and Guilfoyle came together to call President Obama‘s decision to put Eric Holder in charge of reviewing the Justice Departement’s policies for subpenaing journalists “incredibly inappropriate.” And, Greg Gutfeld topped it off by adding, “essentially it’s like having a kid grade his own paper.”