The Five Takes Sides In GOP’s Christie Vs. Paul Fight: ‘Best Thing That Could Happen To The Left’
VIDEO

The Five Takes Sides In GOP’s Christie Vs. Paul Fight: ‘Best Thing That Could Happen To The Left’ 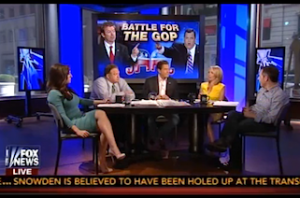 The top story Friday afternoon on The Five was the renewed divide in the Republican Party between “conservative” New Jersey Governor Chris Christie and “libertarian” Sen. Rand Paul (R-KY). The hosts took sides, expressing which wing of the party they believe should represent the future of the GOP.

The debate came after harsh words flew back and forth between the two Republicans, with Christie calling Paul’s libertarianism “dangerous” and Paul tweeting that Christie was only worried about the “dangers of freedom.”

“I think this rift is the best thing that’s happened to the left and to President Obama,” Greg Gutfeld said. He congratulated The Guardian‘s Glenn Greenwald for creating an atmosphere in which we have “one side accusing another of shredding the Constitution” and “the other side accusing them of being soft on terror.” What gets lost, he said, is the middle ground of “reasonableness.”

Eric Bolling was perhaps less willing to embrace “reasonableness,” saying, “the rule of law is now dangerous to Governor Christie. You lost a fan in me, sir.” He added, “Let me get this straight. Rand Paul is dangerous but President Obama and ‘Carlos Danger’ are okay in your world right now?” He then talked extensively about his own experience surrounding the 9/11 attacks to explain his credentials when it comes to security. “I think I have an idea of what terrorism looks like, and it is not innocent Americans being data mined by the NSA,” Bolling said. “It is Islamic terrorists.” He confirmed that after these latest comments, he’s “done with” Christie for good.

Gutfeld fought back against Bolling’s comments, saying, “Christie was talking specifically about data mining, and the fact is to find a needle, you need a haystack. The problem with Rand Paul is that he thinks the needles just show up.”

“Why can’t it be both?” Andrea Tantaros asked. She said ideally she would want someone like Christie who “wants every good tool at their fingertips to prosecute terrorists” and someone like Paul who wants to “have a debate about civil liberties in the era of Obama.”

“I don’t think you can say Chris Christie lost his conservative credentials,” Tantaros responded, pointing to “incredible” record as a U.S. attorney.

If the hosts could agree on anything it was that infighting between potential GOP presidential candidates this far out from 2016 cannot be good for Republicans. As Bolling put it, “Chris Christie going there was a big mistake. They need to be uniting.”