The Lazy, Intellectually Bankrupt Racial Prism Through Which Media And Academia View Terrorism 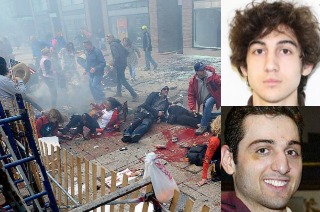 There are many reasons why it is terribly irritating when bright people seek to divine the intentions of the executors of terroristic mass violence through their ethnicity. One of those reasons is that this instinct is regularly indulged by people who consider themselves academicians. What is at its core a reactionary and undiscerning philosophy of drawing conclusions about terroristic violence based on the racial makeup of the accused (often before the perpetrators are even identified) is made more galling because it is regularly couched in the guise of intellectualism. But the impulse to convict or absolve violent criminals based on their race exhibits none of the deliberative characteristics of either academia or journalism. It is just lazy – and it is a laziness coddled and praised by both of those institutions’ elites.

In the wake of the attack on Boston, many within the nation’s commentary class let themselves speculate on the racial makeup of the attackers – this factor’s self-evident irrelevance to the events in Boston notwithstanding.

Chris Matthews, whose analysis is often a leading indicator of the impulse on the left to ascribe racial and political motives to the violent compulsions of sociopaths, took the opportunity of an erroneous report about an attack on the JFK presidential library on the day of the bombings to speculate about the conservative political beliefs of the yet-unidentified perpetrators. Matthews’ speculation proved to be prescient — his reaction foreshadowed a shameful spree of baseless conjecture by other journalists, commentators, and professors.

The following day, Salon’s David Sirota penned an opinion piece as honest as it was intellectually bankrupt admitting that he hoped the bomber was a “white guy.” This eventuality, Sirota reasoned, would serve to force average Americans to view white people with the suspicion he feels they deserve.

To further this narrative, MSNBC host Alex Wagner invited Southern Poverty Law Center fellow Mark Potok on her program on Wednesday to speculate about the “culture of extremism” on the rise in American culture. Disregard the fact that Potok himself had already said that it was unlikely that a domestic militia was behind this attack. Regardless, he was invited onto a cable news network to expound on his most base fantasies about the domestic terrorists who may have perpetrated this attack and the racial animus toward President Barack Obama that may have motivated them.

Later that day, MSNBC invited Harvard University fellow Jessica Stern who speculated on the “leaderless movement” that may have perpetrated this attack. This, she said, is typical of “the far-right, neo-Nazi patriot movement,” a stratagem which was adopted by terror organizations like Al Qaeda. The date, Patriots’ Day, was significant enough for her to pronounce the attack the work of “neo-Nazis” or “anti-government patriot groups.” White supremacist instincts, this respected academician insisted, is behind this madness.

On Thursday, award-winning counterterrorism correspondent for National Public Radio, Dina Temple-Raston, said on her radio network that officials were fairly convinced that the timing of the attack indicated that domestic groups were behind it. “April is a big month for anti-government and right-wing individuals,” Temple-Raston asserted. “There’s the Columbine anniversary. There’s Hitler’s birthday. There’s the Oklahoma City bombing. The assault on the Branch Dividian compound in Waco.”

In a segment on The Young Turks, I argued that the ethnicity of the attackers was irrelevant but their nationality and foreign ties were not. The hosts, displaying a moment of admirable honesty, admitted that they were hoping the suspects in the bombing case would end up being white Americans. They said that this would decrease the likelihood that aggrieved US citizens would flail violently at their dark-skinned neighbors in retaliation.

And then, like magic, all these concerns disappeared when the suspects were identified as radical Chechens steeped in jihadist philosophy. It was then that the faux academic sputtering about domestic terror groups and neo-Nazis evolved from an obsessive desire to identify the philosophical impetus behind the Boston attack to shunning the very notion that anything motivated the bombing suspects beyond their own delusions.

In “The Insanity of Blaming Islam,” Atlantic contributing editor Marc Ambinder writing in The Week went off on how facile ascribing radical Islamist motives to the bombers was to explain what was likely a complex intellectual reasoning behind their calculated attack on civilians.

“But when a white kid murders dozens of children, we don’t ask whether the predominant Christian religion in America somehow radicalized him, or whether his upbringing was somehow less American than anyone else’s,” Ambinder wrote. “Stupid questions! Glad we don’t ask them.”

But we do. That he chooses not to hear the questions when they are repeatedly asked by the nation’s commentators and intellectuals probably leads to a more pleasant existence than the one afforded this humble writer. But those questions are most certainly asked.

Ambinder goes on to identify a series of things about the United States that frustrate him and insist that they are also the motivations behind alienated young Muslim men crafting bombs from pressure cookers, carpenter nails, and zippers with the intention of dismembering as many people as possible:

It is far more plausible that American gun culture, the way that Americans are uncomfortable with people who are different, the gaps in the mental heath [sic] system, and a hundred other things, some of which cannot ever be controlled, pushed these two men over the edge. If it was Islam, or a hidden network of radical jihadists, then these types of events would not be rare in America. That they are is the answer to whether Islamic radicalization is a problem that Americans can and must contend with by stigmatizing Muslims.

“What is it about America that so alienates young men?” Ambinder asks dishonestly. “Here’s the thing: We won’t really ever know.”

It is just so unfortunate that the culprits were radicalized Islamic militants — we will never truly know what motivated them. Were they right-leaning militia members, however, surely their motives would be less complex, far more comprehensible, and should motivate a national conversation about why conservatism is a gateway to violence.

A Sunday morning roundtable of political science professors on MSNBC joined in the chorus of exculpation for the radical young men who bombed the Boston Marathon. “We don’t really know,” quipped Tulane University political science professor Melissa Harris-Perry of the Tsarnaev brothers’ motivation. “I keep wondering: is it possible that there would ever be a discussion like, ‘oh, this is because of Ben Affleck and the connection between Boston and movies about violence?’”

Because it is as absurd, in Harris-Perry’s mind, to ascribe radical Islamist motivations to violence as it is to link incidents of violence to art, she simply disregards the reality that radical Islam has a track record of being linked to violent episodes while fiction and film do not.

“The point is that it’s important to say, ‘that is not us,” agreed Georgetown University Professor Michael Eric Dyson. “We want to demonize the other. We have to distance it from the dominant culture.”

This pattern of absolving the violent of responsibility for their crimes while seeking to link violence to those individuals or groups with political leanings foreign to ones’ own is the polar opposite of the mission of academia. And yet, this manner of obscurant and purely ideological discourse is embraced by the nation’s lettered classes. Surely, in the days that come, the horrors endured by Chechens during the two wars fought by rebels against Moscow’s rule will be invoked to acquit the Tsarnaev brothers of their crimes.

A true academician views as suspect any claim that is not supported by mounds of evidence. But, when it comes to absolution for radicalized Islamic terrorism while stoking fears of nonexistent right-wing violence, the nation’s left-wing professors and journalists seek only the assurance of their own peers to confirm their preconceived notions.

This condition is a cancer within academia and the media. It cheapens both practices and poisons the institutions in which the capable minds who engage in this disreputable practice work. They seek not to add to the culmination of generations of knowledge assembled by their scholarly predecessors, but to buttress their own prejudices and untenable assertions with impressive language and scores of agreeable colleagues.

Grasping at the race of a disturbed individual as a way to partially explain their acts of violence is lazy shorthand. Our media and academic elites can do better than this, but they have become comfortable and complacent — an easy trap to fall into when they are not likely to receive much in the way of criticism from their peers for their lethargic scholarship.