The View, Outnumbered, and Others Heed Calls for Social Distancing: Live From a ‘Big-A** Table’

The View, Outnumbered, and Others Heed Calls for Social Distancing: Live From a ‘Big-A** Table’ 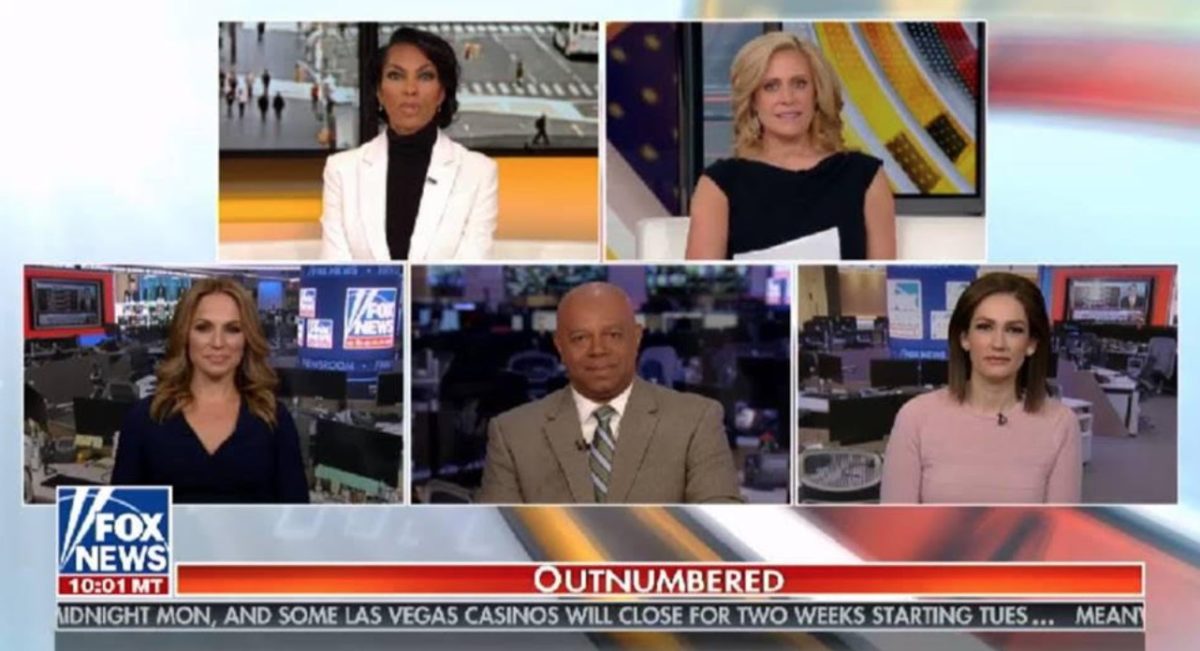 The coronavirus continues to force the country into an abnormal state of affairs, with the recommendation from public health officials that people practice “social distancing” and limit their close contact with one another. Covid-19 is just as big of an issue in the media industry as it is everywhere else, so multiple news shows — particularly those with panels normally seated close together — have taken precautions in order to limit any further spread of the virus.

Last week, Mediaite noted how all of the biggest late-night comedy shows announced that they would go on without studio audiences for the foreseeable future. This was a first for many of these programs, but even as they’ve tried to make it work, more shows are taking up the trend and doing what they can to keep their panelists at a distance.

Let’s take a look at what these shows are doing:

As Harris Faulkner and Melissa Francis started the new week on Outnumbered, they were the only two people on the show’s in-studio couch — and they were seated quite far apart. While Jessica Tarlov, Dr. Nicole Saphier and #OneLuckyGuy David Webb were beamed in from other locations.

“We are about to connect with you, all of you, in way that respects what we are all experiencing in one way or another,” Faulkner said. “The coronavirus pandemic has all of us adjusting.”

“So we’re practicing what we preach,” said Francis. “We’re sitting six feet apart here on the Outnumbered couch, you can see that our guests are joining us from locations outside of our studio.”

“But, the Outnumbered you know well and bless us by loyally watching every day will bring you the same news with heat that you’re used to,” Faulkner said, concluding the intro.

The View went audience-less last week, but when the show returned on Monday, their usual table was gone and replaced with what Whoopi Goldberg called a “very big, big-ass table.” Sara Haines and Dr. Jennifer Ashton were guest co-hosts on the show after Joy Behar announced last week that she would temporarily go into isolation due to concerns about her vulnerability to the virus.

Sunday evening was the first time John Oliver held his show since his fellow late-night comics ditched their audiences. Oliver addressed that fact right away, along with the fact that he wasn’t even in his usual studio because “our actual studio might be full of coronavirus.”

Oliver was referring to the fact that CBS had to close their New York offices recently after multiple employees tested positive for the virus. This has been a major disruption across CBS’ operations, and staffers are being asked to work from home while CBS’ buildings undergo sterilization.

Savannah Guthrie and Hoda Kotb opened Today by showing everyone that they were practicing “a little social distance. Not emotional distance, but physical distance to do our parts.” This occurred while Craig Melvin and Al Roker stayed off the show completely in light of the news that one of Today’s third hour employees has tested positive for the virus.

Watch above, via Fox News, ABC, HBO and NBC.