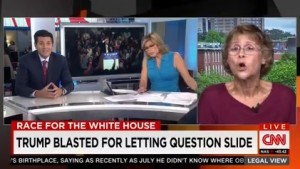 If you don’t know the name Paula Johnson, you soon will. That’s because the co-chair of the New Hampshire-based Women for Trump organization was a guest on CNN’s Legal View Friday morning, and it was television magic. Neither host Ashleigh Banfield nor Johnson’s fellow guest Dean Obeidallah were able to contain the magnificence that was this former alderman and state representative’s tenacious personality.

The subject was Donald Trump‘s Thursday night rally, during which a Q&A session immediately became an anti-Muslim slug-fest directed at President Obama. Obviously, Obama isn’t a Muslim, but this has never prevented his detractors from accusing him of such. And when the accusation was leveled at Trump’s rally, the GOP presidential front-runner didn’t deny it.

Many have criticized Trump’s handling of the situation. Democratic presidential candidate Bernie Sanders called it a “disgrace” and fellow Republican Chris Christie insisted Trump should have corrected the accuser. Yet when Banfield brought the matter to Johnson and Obeidallah’s attention, the former responded beautifully.

“A lot of people ask questions of Mr. Trump, and since we don’t have censorship, people ask anything,” she said, adding that the particular question about Obama being a Muslim was “awkward” and “wrong,” and it “bedazzled” her. She said the word bedazzled.

Johnson immediately went on the offensive, accusing Banfield (and, by extension, the media) of being “upset” with Trump no matter what he does or does not say. What followed was a rather ambiguous line about “immigrants coming into the country.”

Banfield brought up Ahmed Mohamed, the Texas teenager who’s arrest went viral, to clarify whether Johnson’s “immigrants” comments was specifically directed at Muslims and bring the conversation back around to Trump’s rally. Unfortunately for her, Johnson was too smart to take that particular piece of bait, saying that she hadn’t kept up with the story.

But when Obeidallah took his turn and called out Trump for his inaction, the Trump for Women co-chair lost her goddamn mind: “Why don’t we get off of this subject already?”

She tries to shout over Banfield and Obeidallah repeatedly. When Legal View‘s producers quietly reduce her microphone’s volume, she continues shouting anyway. What results is a hilarious visual juxtaposition with the CNN studio on the left, and the screaming, elderly Trump supporter on the right. (Speaking of which, Johnson suggests Obama wasn’t called out for being “disrespectful” to Israeli Prime Minister Benjamin Netanyahu, and compares that to Trump’s current debacle.)