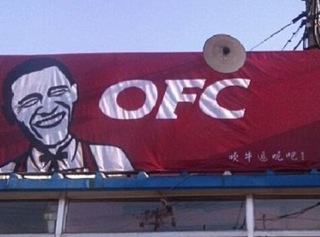 The image of President Barack Obama as Colonel Sanders advertising a fried chicken restaurant would immediately be flagged as unacceptably racist, but that seems to be exactly what has popped up in Beijing. The Daily Mail reports that “Obama Fried Chicken,” complete with the President in suspenders and bow tie and the slogan, “We’re so cool, aren’t we?”

It is already bizarre enough (and probably some sort of copyright infringement, but that depends on what copyright laws in communist China are like) that this independent company decided the President of the United States would be their best spokesman, but it appears they aren’t alone in thinking Obama = infinite chicken profits. The actual KFC has used the President in Chinese commercials, too. The Daily Mail tries to make sense of this:

The Obama Fried Chicken could be a response to the U.S. filing a complaint with the World Trade Organization about Chinese tariffs on American chicken exports.

According to the New York Times, the tariffs affect an industry that employs about 300,000 people and range from 50 to 100 per cent, which means some Chinese importers paid as much as twice the price for American chicken.

Maybe the Chinese have something of an Obama-chicken obsession. Earlier this year in Hong Kong, an Obama lookalike was employed to advertize KFC. The restaurant’s sign was first spotted by TheShanghaiist.com and picked up by msnbc.com. […]

Some people have complained the name plays into old racial stereotypes.

Hmm… wonder why anyone would think this plays into racial stereotypes! Best case scenario, this is a very bizarre phenomenon– the President has popped up on all sorts of kitsch before– but there are certainly some serious red flags (no pun intended) being raised by the fact that the President keeps popping up in China as an effective fried chicken salesman.