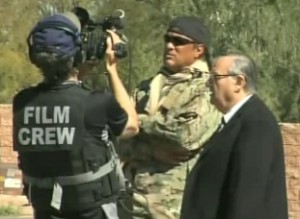 In what some are calling a publicity stunt for A&E’s reality series Lawman, actor Steven Seagal manned a tank during a ridealong with Arizona Sheriff Joe Arpaio, his deputies, and a SWAT team earlier this month. Their quarry was unarmed suspected cockfighter Jesus Llovera, and the Sheriff’s Department said they were just “err(ing) on the side of caution.”

Yes, according to reports, Arpaio actually used two armored vehicles and a SWAT team to take down lone alleged cockfighter Llovera, in a scene that sounds like the climax of Cockocalypse Now. Seagal explained to reporters that “Animal abuse is one of my pet peeves.” I pity that one tube sock that Seagal finds in his dryer.

All kidding aside, cockfighting is a despicable crime that certainly deserves to be punished, but in a state whose governor has cut funding for human organ transplants due to budget constraints, is this really a good use of Arizona taxpayers’ money? And  if they were going to spend the money, couldn’t they have at least gotten Chuck Norris?

Perhaps there is a silver lining to this episode. The producers of “reality TV” seem to have dropped any attempt to conceal its contrived nature, so maybe Arpaio and Seagal can be persuaded to do a crossover episode with Jersey Shore. Now, that’s Must See TV.