Touré On Donna Summer: Anti-Disco Movement Pushed People To ‘Get Back In The Closet’ 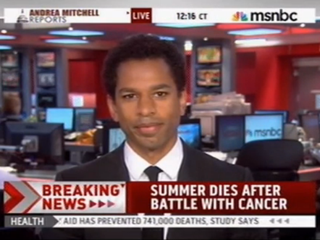 The passing of legendary disco singer and one of America’s first dance music icons Donna Summer received an immediate, mournful reaction today. On MSNBC today, Andrea Mitchell sat down with Touré to get his take on the impact Summer and disco music had on American culture in general. Praising her “big, lush, beautiful voice,” he chided the anti-disco movement as something political, forcing those who enjoyed it to “get back in the closet.”

“It’s interesting to approach this at this moment in politics,” Touré noted, praising disco as a movement of “gay exuberance and joy” and bright cultural energy. “I’ve never seen a movement in America to crush a musical genre in the way that the sort of organized anti-disco music rose up.” He described the sentiment as “get back in the closet, you can’t have something for yourself,” something he compared to the opposition to marriage equality. “You can’t be out and normalized in public,” he noted, and explained the attack on disco as a return to “white male power, rock and roll and punk.”

Touré is a commentator that often gets himself into hot water by talking straight, wonky politics after putting down the cornerstone of his career in the music industry. His commentary on the politics of disco– acknowledging that bigotry had more than a small role in trying to kill disco, and Donna Summer’s role in normalizing dance music– is a reminder of both of Touré’s formidable understanding of music as a cultural and political force and a warm statement on how much generations subsequent to the “kill disco” one now understand the cultural impact and aesthetic beauty of a genre that was all but public enemy #1 in the peak of its success. It took a few years, but seeing disco icons receive the same respect and appreciation those of other genres take for granted was something many at the time were unlikely to predict seeing now.