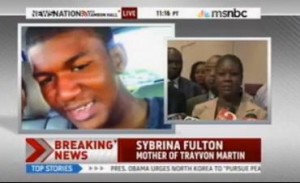 Tracy Martin and Sybrina Fulton, parents of slain teenager Trayvon Martin, held a news conference this afternoon to respond to reports about their son’s suspension from school, and reports that have been released by the Sanford Police. Ms. Fulton delivered a comment as brief as it was emotionally devastating: “The only comment that I have right now is that they’ve killed my son and now they’re trying to kill his reputation.”

Family attorney Benjamin Crump began by decrying aspersions cast about Trayvon Martin’s suspension from school, and by accusing police of trying to backstop their decision not to arrest George Zimmerman for Trayvon’s shooting. “Once again, law enforcement is attempting to demonize and blame the victim by releasing bits and pieces of their ongoing investigation that they feel will help build Zimmerman’s claim up,” Crump said, his voice cracking with emotion. “It is irrelevant. Completely irrelevant.”

Tracy Martin, the late teenager’s father, told reporters that “Even in death, and Trayvon is gone, he will not be returning to us…even in death, they are still disrespecting my son. And I feel that’s a shame.”

Then Trayvon’s mother, Sybrina Fulton, took to the podium, and delivered a searing rebuke. “The only comment that I have right now,” she said, “is that they’ve killed my son and now they’re trying to kill his reputation.”