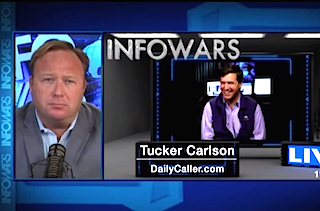 Fox News’ Tucker Carlson joined InfoWars’ Alex Jones Thursday to pick up where Ben Stein, who recently called President Barack Obama “the most racist president there has ever been in America,” left off. When Jones asked Carlson to react to Stein’s comments, the pundit didn’t disagree, but rather went on to explain how he believes the president is using “racial fears” to divide the country.

“I have no idea what’s in his heart. I have no idea what his true beliefs are,” Carlson said of Obama. “But it’s very clear — they’ve made it as clear as it’s ever been in the last two weeks — that they’re willing to use race to divide the country to get out the vote and use racial fears to get their base out to the polls.”

While “practically every other country on the planet is divided by ethnic politics” Carlson said that “we haven’t been historically, but we’re moving in that direction.” Warning that those divisions can turn “bitter” and “violent,” he added, “You don’t even want to play with that stuff and they’re doing it in a big way and it’s reckless.”

Jones took things one step further, saying that the establishment is trying to “flood us with all these illegals” to increase the “Balkanization” of America.

“I don’t think there’s any doubt about it,” Carlson replied. “There’s no doubt that they see immigration as a source of political power and that’s scary.”

Watch video below, via InfoWars: