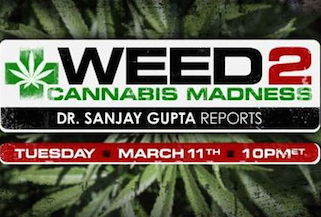 CNN scored a rare prime time victory over MSNBC last night in the 25-54 demo, partially thanks to Dr. Sanjay Gupta’s special Weed 2: Cannabis Madness, which aired at 10pm ET on the network (and repeated at 11). CNN averaged 325K viewers in the demo during prime time, while MSNBC had 223K. Each of CNN’s prime time show topped 300K viewers, besting MSNBC’s line-up, which did not break 300K.

The first airing of Weed 2 was the highest-rated hour of the night in the demo on CNN with 354K viewers. That made it the third most-watched show on the night overall in the demo, behind only Fox’s The O’Reilly Factor with 458K and Hannity with 370K.