Ellen DeGeneres Defends Herself for Sitting With George Bush 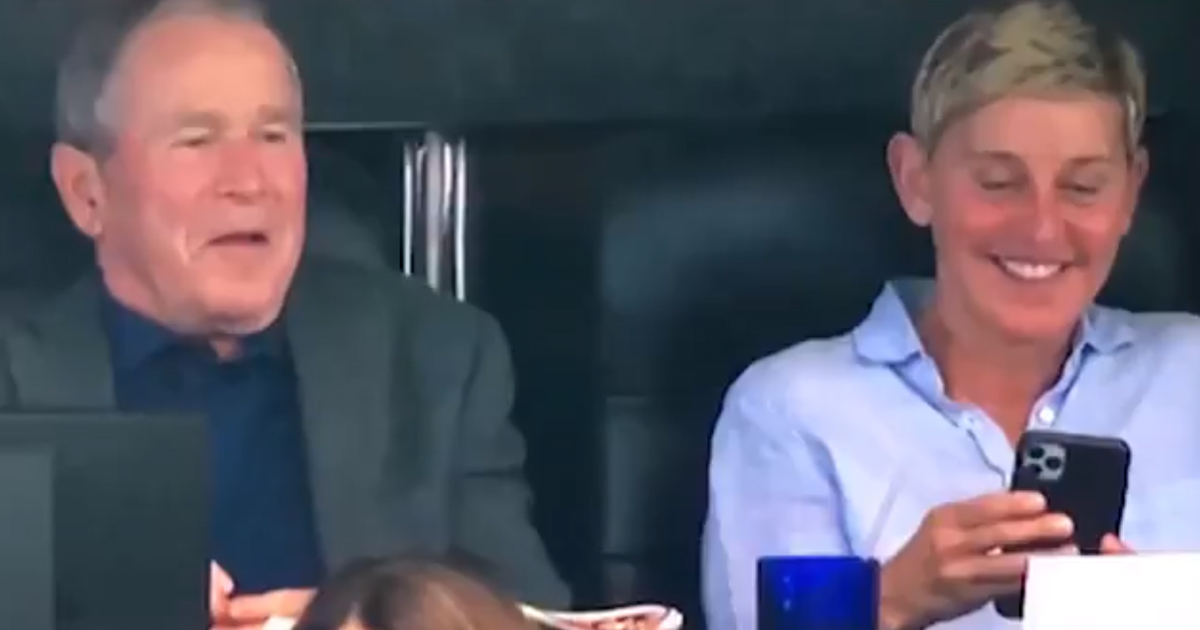 Comedian and talk show host Ellen DeGeneres posted a video on Twitter that both poked fun and seriously addressed the Internet outrage ignited after she sat next to former Republican President George W. Bush at a Dallas Cowboys game this past weekend.

Video of DeGeneres and Bush — both of whom attended with their spouses — talking and laughing together in the Cowboys owner suite quickly went viral, and prompted many liberals to condemn her friendly behavior toward the former president. The gay magazine, The Advocate, added fuel to the fire by publishing a stinging commentary that called out DeGeneres for cozying up to a president who fear-mongered over gay marriage as part of his 2004 re-election strategy.

DeGeneres, who gave her remarks to a studio audience at her Ellen Show, started off her by providing the back story behind her invitation to the Cowboys game, by the owner’s daughter, Charlotte Jones.

Yes, that was me at the Cowboys game with George W. Bush over the weekend. Here’s the whole story. pic.twitter.com/AYiwY5gTIS

Eventually, DeGeneres acknowledged the online anger over her time spent with Bush, who she has previously called a “friend.”

“And so people were upset,” DeGeneres noted, before throwing in a joke for good measure. “They thought, why is a gay Hollywood liberal sitting next to a conservative Republican president? Didn’t even notice I’m holding the brand new iPhone 11.”

“But a lot of people were mad. And they do what people do when they’re mad, they tweet. But here’s one tweet that I loved,” she said. After which, she displayed a massive screenshot of a post from “Matt,” who has fewer than 500 followers and whose only identifying information in his bio is “Waterloo,” a college in Canada.

HAHAHA Ellen and George Bush together makes me have faith in America again https://t.co/LMWYhwVy10

Notably, the screenshot of Matt’s moral support was not verbatim, and left out Matt’s more ambiguous “HAHAHA” precursor. DeGeneres’ audience cheered at the tweet, however, while she applauded as well and added: “Exactly!”

“But just because I don’t agree with someone on everything doesn’t mean I’m not going to be friends with them,” DeGeneres said, to more applause. “When I say be kind to one another I don’t mean only the people that think the same way you do.”