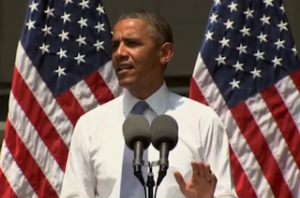 Wiping sweat from his brow under the hot sun at Georgetown University in Washington, D.C. today, President Obama delivered a major speech on climate change that was nearly as comprehensive in scope as his recent address on national security. As expected, Obama touched on the pending decision on whether to move forward with the Keystone XL pipeline that would carry tar sands oil from Canada to the Gulf of Mexico. Without announcing a final call one way or the other, the president said he would only allow the pipeline to be built if it does not “significantly exacerbate the problem of carbon pollution.”

After presenting his plan to spur more renewable energy production in the United States, Obama told the crowd, “one thing I want to make sure everybody understands is this does not mean that we’re going to suddenly stop producing fossil fuels.” He noted, “our economy wouldn’t run very well if it did.” But, he said, “we can’t just drill our way out of the energy and climate challenge that we face.”

“The energy strategy must be about more than just producing more oil.” To applause from the audience, he added, “and it’s certainly got to be more than just building one pipeline.” On the State Department’s decision on whether to let the pipeline move forward, Obama said, “allowing the Keystone pipeline to be built requires a finding that doing so would be in our nation’s interest. And our national interest will be served, only if this project does not significantly exacerbate the problem of carbon pollution.”

“The net effects of the pipeline’s impact on our climate,” Obama concluded, “will be absolutely critical to determining whether this project is allowed to go forward.”

The State Department’s initial environmental impact statement on the issue found that the pipeline would have negligible impact on global greenhouse gas emissions, a conclusion that the EPA subsequently labeled “insufficient” in its assessment of the impact. Meanwhile, studies by climate scientists have suggested that the pipeline would “raise greenhouse gas pollution by the equivalent of nearly 40 million cars and trucks.”