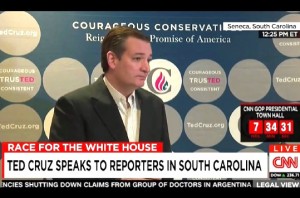 Was there anything that Texas Senator Ted Cruz didn’t aggressively address in his bizarre press conference Wednesday afternoon?

The pressure is on to be sure. In South Carolina, voters will make their way to the polls in just three days for the state-wide Primary, and Cruz is hoping to repeat his success in Iowa by finishing on top. But in his way are a swirling list of controversies that have dogged his campaign appearances, and the Texas Senator used the opportunity on Wednesday to try and swat away as many of them as possible.

this epic news conference is stark display of Cruz’s appeal to base. Also, why the other candidates (and senators) don’t like him at all.

Falsehoods have no place in american politics — Ted Cruz, prompting the world’s collective eyes to pop out they rolled so hard

Ted Cruz now: Claiming that CNN reporting something that it never reported.

Ted Cruz was “taking it to a new level” said CNN’s Jim Sciutto of the press conference, which you can watch above.