Wayne LaPierre On Whether NRA Supports Universal Background Checks At Gun Shows: ‘We Do Not’
video

Wayne LaPierre On Whether NRA Supports Universal Background Checks At Gun Shows: ‘We Do Not’ 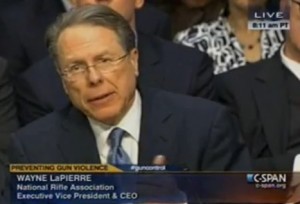 Sen. Leahy began by asking LaPierre, “In 1999, you testified before the House Judiciary Committee, and you testified ‘Nobody is more committed than we are and to keeping guns out of criminal hands. that is in our best interest.’ I assume you are still committed to that endeavor, correct?”

“And do you agree that we should prosecute and help get those criminals to get done?” Leahy asked.

Ïf they are doing a straw man sale, they should be prosecuted. absolutely.” LaPierre said.

Sen. Leahy went on to ask whether actual criminals should be allowed to purchase firearms at gun shows. “Do you still, as you did in 1999, still support mandatory background checks at gun shows? Yes or no?” Leahy asked.

LaPierre replied. “We supported the national background check system on dealers. We were here when one of your colleagues held the hearings in terms of who would be a dealer and who would be required to have a license…”

“Let’s make this easy,” Leahy interrupted. “I’m talking about gun shows. Should we have mandatory background checks at gun shows for all sales of weapons?”

“If you are a dealer, that is already the law,” LaPierre dodged.

“That is not my question,” Sen. Leahy interjected. “Please, I’m not trying to play games. If you could, just answer my question.”

“I do not believe the way the law is working now, unfortunately, that it does any good to extend the law to private sales between hobbyists and collectors,” LaPierre responded.

“You do not support background checks in all instances at gun shows?” Leahy asked.

So, Wayne LaPierre favors prosecuting anyone who purchases a firearm, then sells it to a criminal, but also favors allowing the actual criminals to purchase firearms from private sellers at gun shows, which eliminates the need for straw-purchasers.

LaPierre wasn’t done making anti-sense, though. He went on to explain that he opposes more background checks because less background checks aren’t working. “The fact is, the law right now is a failure, the way it is working.”

“My time is up,” concluded a frustrated Sen. Leahy. “With all due respect, that is not a question I asked, nor did you answer it.”

That’s true, nor did LaPierre’s testimony explain why he deserves a seat anywhere but in a corner, wearing a pointy hat.