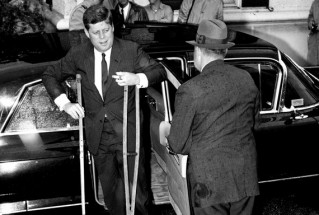 John F. Kennedy is obviously revered by almost all Americans regardless of political party preference or ideology. We celebrate his life and legacy today, and think of what might have been if he survived that fateful day in Dallas 50 years ago.

1963 was a different world, a different political landscape…no question. Some argue—and it’s a solid point—that between the tax-cutting policy for all income earners (See: not targeted cuts) at home and the hard line taken with the Soviets both verbally (he called them “evil”) and through action (Cuban Missile Crisis), the Democratic Kennedy was arguably much more Ronald Reagan than Barack Obama.

But would Kennedy have even been elected to higher office in 2013? In today’s TMZ-esque, social media-obsessed, opinion-driven, polarized media that focuses more on posturing and personality than policy and principle, the answer is…absolutely not.

Media coverage of JFK was immeasurably kinder than the likes any President in the cable news era (Obama, Bush, Clinton) could ever dream of having. For example, two primaries aspects of Kennedy’s personal life—his major health issues and extracurricular activities—were hidden from the public…aided and abetted by a media who didn’t deem it respectful nor proper to reveal such secrets.

That’s not a statement meant to be negative. It was just a different time.

These two aspects of Kennedy’s life obviously didn’t have any noticeable effect on his job performance. He may have been in office for less than three years, but given the economic direction of the country (busting out of a recession he inherited when taking office via said tax cuts), the symbolic victory of the Cuban Missile Crisis (get the movie Thirteen Days with Kevin Costner if you want to see the most underrated political flick ever), and the overall feeling of optimism Kennedy exuded that was shared by a strong majority of American citizens (58 percent approval, only 30 percent disapproval in November of ’63), we can only wonder what the world would be like today if he went on to serve two terms.

But if the campaign of 1960 were inserted into 2013, it would have been disaster from the start. In the race to find sensational, attention-grabbing headlines, Kennedy’s personal life–not his stances on fiscal matters or foreign policy–would be been put under a microscope first. Various women in Kennedy’s life—tempted by checkbook journalism or the need to join the reality show ranks—would come forward. The Monroe-Kennedy affair—when revealed—would be the lead story on cable news and across magazines nationwide for weeks. Seriously…it would be tantamount to Beyoncé singing Happy Birthday, Mr. President and being caught sneaking out of the White House while First Lady Michelle was away with the kids.

And that’s not even considering the chronic back problems (Addison’s disease) that forced Kennedy to use crutches to get around (in private, of course). Amazingly–by today’s standards–the press was told not to take any photos that included the President’s crutches in the shot, and they mostly obliged out of respect (or fear) of the office. The 35th President was also dependent on pain killers. He suffered from debilitating ulcers and colitis. Back surgery nearly killed him in 1954. A priest actually administered last rights before Kennedy defied the odds.

In total, Kennedy took painkillers for his back, steroids for Addison’s disease, antibiotics for UTI (urinary-tract infections), antihistamines for allergies, anti-spasmodics for colitis (all via the infamous “Dr. Feelgood”, Max Jacobson). In short, he was an absolute mess physically, but put all of it aside in public as well as anyone could possibly expect…declaring himself in “excellent shape” shortly after defeating Richard Nixon in 1960.

Hiding such information, such a massive amount of problems, today?

President Kennedy is arguably the most beloved American figure of the 20th Century.

Because the current appetite for sensationalism and scandal wouldn’t have allowed a President Kennedy to exist in the first place.