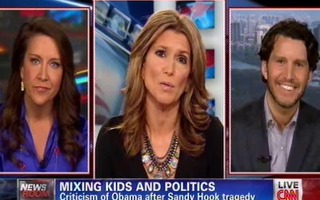 President Barack Obama is under fire from conservatives due to his decision to announce new gun control measures via executive fiat while being flanked by a group of children. Republicans have accused the president of exploiting sentimentality in order to create the impression that his actions are morally – if not politically – justified. Emotionalism is toxic to the drafting of sound and effective legislation, and CNN contributor Will Cain made that point better than anyone today. But he could not have made his point as effectively as he did if his thoughtful analysis had not been so wonderfully contrasted by the impotent fervency and irrationality masking itself as compassion displayed by CNN host Carol Costello and Democratic strategist Maria Cardona.

Many conservatives have expressed their frustration with the president’s use of children as a prop to suggest to the viewing audience that his actions are aimed at helping the America’s most vulnerable. Whether the president’s actions enjoy that level of efficacy is up for debate, but, as Human Events columnist David Harsanyi noted Thursday, the backdrop of 7-year-olds is intended “to shield him from debate.”

Harsanyi was not alone. In this CNN segment, Republican politicians and commentators both are quoted scolding the president for using children to advance his agenda.

And they are correct. Displaying children at signing events is a device intended to inject emotionality into a political argument, and there is no more formidable obstacle to devising and implementing shrewd and targeted public policy than the self-important urgency of emotionality. Indignation and agitation do not suffice for an argument. There was a time not long ago when the American public and its journalists applauded deliberation and rationality in response to “the fierce urgency of now.”

Unfortunately, that time has passed, as evidenced by Costello and her predictable admonition of Republicans for their insufficient emotionality at the beginning of this segment.

In a conversation about the president’s use of children to advance a political agenda, Costello and Cardona painted a poetic picture of Democrats surrounded by the nation’s future leaders while scolding Republicans who were offended by Obama’s transparent guilt trip.

Defiant in the face of righteous opposition, Cain called both the president and his fellow on-camera commentators in the harshest of ways. “I cannot find an ounce of appropriateness in this,” Cain said. “I find it despicable. I find it stomach-churning.”

“It’s impugning the motives of anyone who disagrees with him,” Cain continued. “It’s draping yourself in the emotionalism of the debate; avoiding an intellectual debate, avoiding the policy debate.”

The use of children to make a political point crossed some imaginary line for Cardona and Costello, however, when they brought up the National Rifle Association’s ham-handed and tone deaf ad in which the NRA suggests the president is a hypocrite for sending his children to a school protected by armed guards while opposing armed protection in the rest of the nation’s schools — the premise of which turned out to be entirely incorrect.

“That is absolutely despicable,” Cardona said without a hint of irony. “Nobody gave the NRA permission to use those children.” As though the only license a politician requires to engage in some time-honored grandstanding in front of a curtain of children in order to make a political point is the permission of their parents.

“I’ve never objected to a little emotion in an argument,” Costello said, confusing a public policy debate between competent elected officials with a compelling cable news segment. “You kind of need emotion to get the argument going, to get people talking about it because not everybody wants to.”

“I don’t feel like emotion has place in a debate, because emotion doesn’t encourage rational debate – it shuts it down,” Cain said. “It supplants rational debate with quick, emotional reactions.”

“When the president is doing that, that’s exactly what he’s encouraging,” Cain added. “He’s encouraging you to feel your way through this debate – not think.”

And what reaction did Cain’s plea for dispassionate analysis get from Cardona? Perhaps the most argument-supporting overreaction he could have possibly hoped for. Cardona allowed herself a near-red faced response to Cain’s incitement. When Costello shut her down due to the time constraints of that particular segment, Cardona’s, and eventually Cain’s, microphones had to be cut off.

Presidential candidate and progressive hero of a generation ago, Adlai Stevenson, knew emotionality was toxic to public debate and general equanimity. “Patriotism is not a short and frenzied outburst of emotion but the tranquil and steady dedication of a lifetime,” Stevenson once said. The nation’s liberals would do well to again take that lesson to heart.