Wilson, Brown Attorneys Square off over Whether Ferguson Prosecutor Tried for an Indictment
VIDEO

Wilson, Brown Attorneys Square off over Whether Ferguson Prosecutor Tried for an Indictment 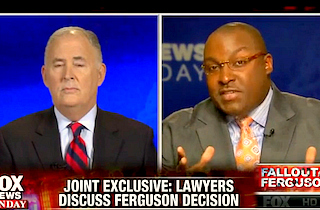 The attorneys for Ferguson officer Darren Wilson and the family of slain teenager Michael Brown both appeared on Fox News Sunday, where the former said the Grand Jury process was fair and definitive, and the latter cited the prosecutor and the process he led for being biased toward Wilson.

“I find it astonishing that we have criticism of this Grand Jury, because people say they were given way too much information,” Wilson attorney Neil Bruntrager said. “This Grand Jury clearly looked at everything. They asked questions, they were engaged. I don’t know how Mr. Parks says we get in the head of the prosecutor by perhaps some means to figure out that they didn’t want an indictment. I’ve read these transcripts, and what I see is a prosecutor who put all of this information in front of a Grand Jury and said ‘you decide.'”

“We’re not indicting the Grand Jury,” Parks clarified. “I think the process was flawed as was laid out by the prosecutor.”