Wolf Blitzer Baffled at Baltimore Riots: ‘I Don’t Remember Seeing Anything Like This’ in a ‘Long Time’

Wolf Blitzer Baffled at Baltimore Riots: ‘I Don’t Remember Seeing Anything Like This’ in a ‘Long Time’ 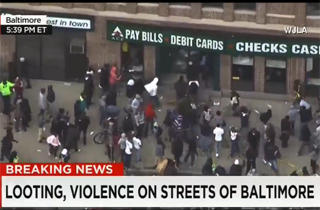 Wolf Blitzer spent his afternoon narrating over some traffic camera footage of the riots in Baltimore that quickly overwhelmed the protests for Freddie Gray, baffled that the police weren’t stopping people who appeared to be looting multiple stores.

In one instance, Blitzer expressed shock that people seemed to be looting a CVS, and later, a payday loan company, without any sort of resistance from police forces “I don’t remember seeing anything like this in the United States of America in a long time,” he said.

As Blitzer’s coverage continued, Twitter quickly turned on him, and here is but a sample, because something happened last August that was quite similar to this incident:

@wolfblitzer says he hasn't seen riots like #Baltimore in quite some time. Was he on vacation when #Ferguson & NYC was happening?

@cnnbrk wolf blitzer says "people are wondering what's going on in Baltimore?". I'm wondering " What did you think was going to happen?"

The Wolf Blitzer play by play of Baltimore right now is insane, he seems so removed from the reality of what is happening

Wolf Blizter just said, "it's hard to believe this is happening in Baltimore" …you never been to Baltimore.