Democrats Should Not Fear Impeaching Trump, Even Though He Would Likely Enjoy It
Opinion

Democrats Should Not Fear Impeaching Trump, Even Though He Would Likely Enjoy It 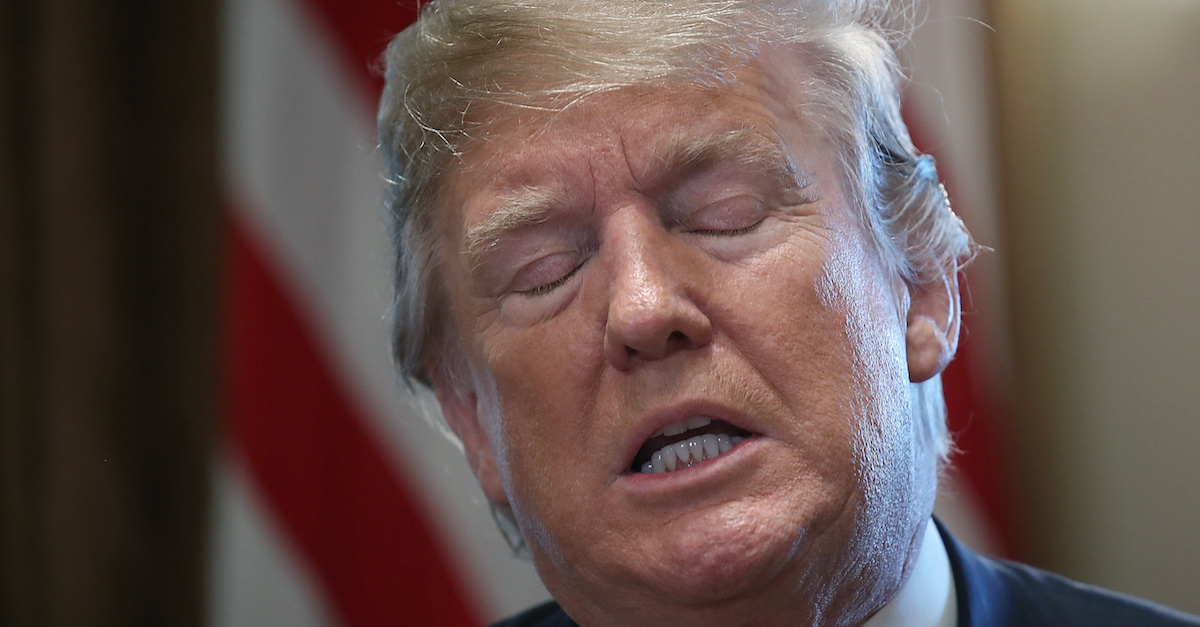 Most of the debate over a newly-minted congresswoman, Rashida Tlaib, declaring that she and her fellow Democrats will “impeach the motherfucker,” has been about her use of language which, before President Donald Trump changed all the rules, would have obviously been totally inappropriate. While that discussion is interesting, however, the core issue here, which would not be nearly as big a news subject if not for her use of profanity, is whether Democrats should fear impeaching Trump.

The Democratic reaction to Tlaib’s possibly contrived — and very successful — bid to increase her public stature within the liberal elite has indicated that there is at least great hesitation, if not overt dread, over the prospect of having to impeach Trump now that they theoretically have the votes in the House to do so. Speaker Nancy Pelosi reportedly told Trump personally that it is not her intent to impeach him, and the head of the House Judiciary Committee, Jerry Nadler, basically condemned Tlaib’s comments.

There is a strong argument to be made that this reaction from top Democrats is largely strategic, and they want to keep their powder as dry as possible for when Robert Mueller’s investigation is finally completed. If this is indeed the case, then the Democratic reaction to this issue being raised now is quite rational (though, it should be pointed out that a legitimate case could already be made for Trump’s impeachment based on what is in the public record, including, for instance, his own words about why he fired James Comey as his FBI Director).

If due to political concerns, however, there is genuine hesitation on the part of top Democrats and those just-elected in close races to impeach Trump, then this reluctance is badly misplaced. If Trump has likely committed impeachable offenses (a purposely and problematically vague term), then the potential political ramifications for charging him with that, or the very low probability of him actually being removed in the Senate because his party controls that chamber, should take a distant back seat to what is best for the long-term interests of the nation.

An impeachment process should only be started against the president when the facts warrant it, but just because doing so may not be a political winner, nor ultimately result in their actual removal, does not mean that it should be avoided. Sometimes doing what is clearly right comes with a price.

Obviously assuming such an altruistic equation to still be relevant in this exceedingly selfish era would be naïve. Which is why it is important that Democrats not be fooled into believing that there actually would be a significant political cost to impeaching Trump.

Yes, Trump’s approval ratings are such that he cannot realistically be removed by a Republican Senate, and yes the public support for impeachment among non-Democrats is extremely low. But the part of this calculation that is based on a misreading of history, is when today’s situation is compared to the impeachment of Bill Clinton.

After the midterm election, I interviewed by good friend, Democratic Congressman John Yarmuth (the new head of the House Budget Committee), and was startled to learn that the false legacy of Clinton’s impeachment having supposedly backfired on the GOP was, like a dark cloud, clearly hanging over this entire issue. As those who listened to our remarkable exchange already know, my impassioned rebuttal to this concern seemed to make a very real impact on his public position.

It cannot be forgotten that, while it is widely (and wrongly) perceived that the GOP made a political mistake in impeaching Clinton, the flowing facts are undeniable:

While there are obviously a myriad of reasons why all of those events happened, it cannot be rationally denied that Republicans, at least as a party, suffered no serious consequences due to their largely, though not completely, partisan impeachment of Clinton (who, it should be noted, was much more personally popular than Trump is). There is a far better case to be made that the stain which impeachment left on the Clinton name may have been one of many factors preventing Hillary from every being elected president.

It is clear that, much like with what happened with Clinton — barring a currently inconceivably strong rebuke from Mueller — Trump would not be removed from office. In fact, some commentators, including myself, are quite convinced that, much like Clinton, Trump would actually enjoy the process because it would force Republicans to defend him on a daily basis, and it would ultimately end in him being able to declare some semblance of “victory” when he was inevitably acquitted in the Senate.

Heck. Trump the reality television producer may actually desire his own impeachment as a ratings-grabbing “Season 5” plot twist, one which is practically being demanded by the audience and the media critics. Though, based on his own comments about this, it isn’t entirely clear that Trump even understands how the process works.

If the Democrats in the House honestly do not think that the factual record warrants Trump’s impeachment, that is currently a somewhat defensible position. However, it would be tragically wrong if they were dissuaded from holding Trump at least symbolically accountable, while protecting the impeachment process from being rendered unusable in the future (potentially against a constitutional threat even more dangerous than Trump), because of a misreading of history, and an underestimation of the heavy stakes involved here.